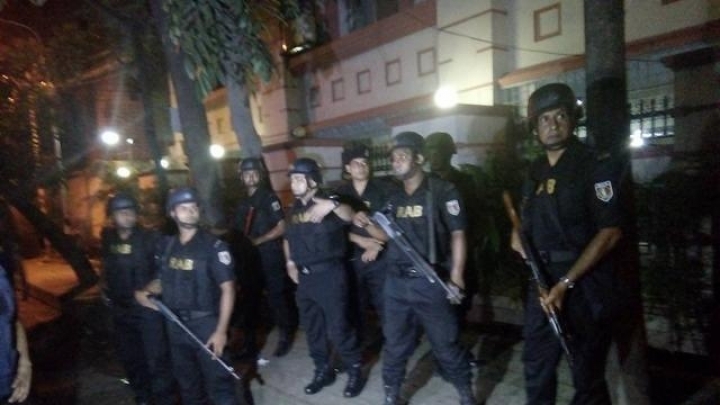 Several police officials have been wounded in the apparent terrorist attack, at least 20 civilians, mostly foreigners, held hostage inside the restaurant, according to witness accounts, reports Dhaka Tribune.

12:10pm- In an immediate reaction, the US State Department said on Friday that it was too early to say who was involved in the hostage situation or what the motivation might be, but it confirmed that all Americans working at the US mission there had been accounted for.

"We have accounted for all Americans working for the chief of mission authority" in Dhaka, State Department spokesman John Kirby told a press briefing. He said the situation was "very fluid, very live."

11:20pm- "We are requesting the ones who are inside the restaurant to talk to us, relay usyour demands," said the RAB DG.

11:20pm- The RAB DG confirms that the gunmen kept the hostages at O'kitchen restaurant, which is a sister concern of the Holey Artisan bakery and operates from the same building at Road-79 in Gulshan 2.

11:20pm- Dubbing the ongoing incident a hostage situation, the RAB Director-General Benazir Ahmed told reporters on site: "We would like to resolve the situation peacefully. And I urge everyone to remain calm and not to panic." He declined to provide further information on the development.

10:55pm- Sumon Reza, superviser at the bakery, who escaped the attack, told reporters that at least 20 people were at the bakery when the attack began and all of them were foreigners. He saw two attackers and both of them were slim and appeared to be under 30. He said they had small firearms and at least one was carrying a sharp weapon. He said the attackers were shouting 'Allahu Akbar' when coming into the bakery. Two of the bakery's staff are also foreigners, he said. One baker, an Italian, had escaped the attack but the other one, an Argentine, could not, according to Reza. His information could not immediately be verified.

10:45pm- Three people were shot at 10:30pm. Of them, two are police personnel, poilce sources confirmed.

10:30pm- An explosion has been heard from the site.

10:20pm- Dhaka Tribune's DMCH correspondent Aminul Islam Babu confirmed the identities of the injured. They are—Abdur Razzak, a driver in profession who took a bullet in throat and police constables Pradip and Alamgir. The police personnel were shot in their right legs.

9:50pm- Police is yet to reach the vicinity of the site due to indiscriminate shooting by the unidentified gunmen, Salauddin Ahmed, Gulshan police inspector. A joint team of police, RAB, BGB has been deployed at the site, Salauddin said.

9:30pm- Earlier, Dhaka Tribune received unconfirmed reports of severe gunfire exchanges in several parts of Gulshan and adjacent areas since 8:45pm Friday evening. A Dhaka Tribune reporter received unconfirmed report of the killing of two people at the Holey Artisan bakery in Gulshan-2. Three heavily-armed gunmen entered the bakery and started shooting indiscriminately, leaving the two unidentified people dead. Unconfirmed reports also suggested that the both the chefs of the bakery have been taken into hostage.