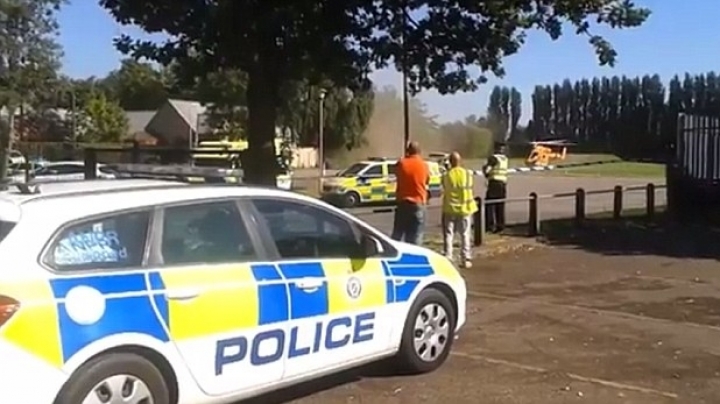 Two women were shot dead outside a swimming pool by a gunman who turned the weapon on himself in a suspected murder suicide today, reports Daily Mail.

Emergency services were called to The Castle Leisure Centre at around 9am where the three bodies were found in the car park.

Police, paramedics and the county's air ambulance are at the scene today and a large portion of the town centre has been cordoned off.

Lincolnshire Police said today that their officers had not fired any shots – and the incident is likely to be linked to a domestic dispute, according to social media sources.

Detectives say that they are not looking for anyone else in connection with the shooting.

Schools were told to keep their students inside and local businesses locked their doors until police were sure the shooter was dead.

A Lincolnshire Police spokesman said: 'We can confirm that there has been a firearms incident on Pinchbeck Road in Spalding in the vicinity of the Castle Swimming Pool, in which three people have been fatally wounded, including the suspected offender. There is an ongoing police investigation and at this stage we are not looking for anyone else in connection with the incident.

'There is no indication that this is a terrorist related incident and no shots have been fired by police. We would urge members of the public to stay away from the area at the present time.

'There is an ongoing police investigation and at this stage we are not looking for anyone else in connection with the incident.'

Labour leader Jeremy Corbyn has taken to Twitter following the triple shooting to pay his respects to the victims and their families.

Writing on social media this morning, Mr Corbyn said: 'Shocking events in Spalding, Lincolnshire. My thoughts are with the victims and their families.'

Meanwhile, locals described the incident as 'devastating' with one woman claiming it had sent a 'cold shiver' down her spine.