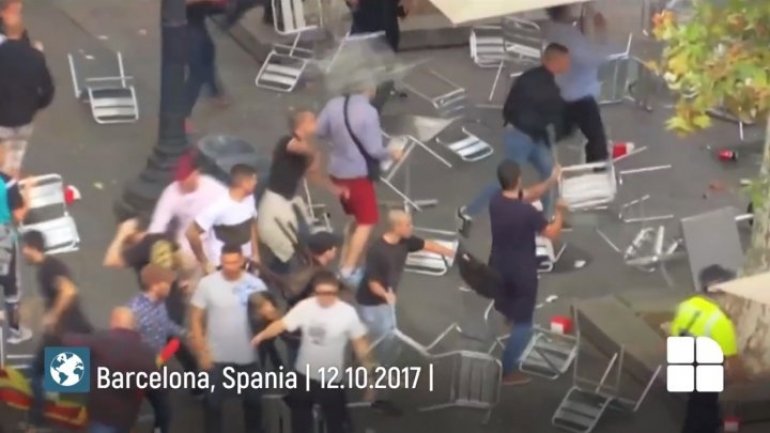 The Latest on Catalonia’s independence bid (all times local):

Two small groups of protesters have clashed in central Barcelona as a unionist demonstration of thousands was getting under way, with people throwing chairs at each other before local police separated them.

It was unclear what sparked the violence on Thursday and who was involved.

Footage obtained by The Associated Press showed chairs flying in both directions, as Barcelona’s urban guard and regional police removed a few dozen protesters on each side.

A nearby demonstration led by a group of civil society groups opposing a separatist bid in Catalonia wasn’t disrupted.

A separate protest of around 200 supporters of far-right and Spanish nationalist groups ended on Barcelona’s Montjuic hill with speeches and the burning of a “Senyera,” the unofficial flag that has become a symbol for Catalan separatists.

A spokesman with Spain’s Ministry of Defense says that a military pilot has died after a fighter jet that was returning from a national day parade crashed in southeastern Spain.

The spokesman said the fighter jet was among four that participated in the parade in Madrid. Speaking anonymously, as its customary among civil servants in Spain, the spokesman said the Eurofighter plane crashed in Llanos de Albacete, a county some 300 kilometers (200 miles) southeast of the Spanish capital.

The spokesman said the pilot didn’t have time to jump out of the jet, adding that the causes of the crash are under investigation.

Participants, some of whom had painted their faces in red and yellow, shouted “Viva Espana,” or long live Spain, and “I am Spanish.”

A few yelled “Puigdemont to prison,” referring to Catalan leader Carles Puigdemont, who challenged Madrid by holding an Oct. 1 referendum on independence that the Spanish government said was illegal. The slogan of the march is “Catalonia yes. Spain, too,” supporting autonomy for Catalonia, but within Spain as a whole.