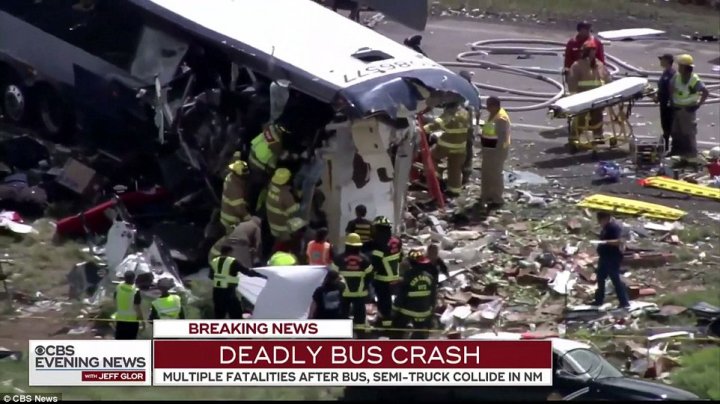 A Greyhound bus carrying 49 passengers and a semi-truck collided in New Mexico on Thursday, killing at least seven people and inflicting many others with serious injuries.

'Preliminary crash information indicates a semi-tractor-trailer traveling on I-40 [eastbound] had a tire blowout and crossed into oncoming [westbound] traffic, colliding with a Greyhound bus,' the New Mexico State Police Department said.

At least 43 people have been taken to area hospitals, he driver of the semi-truck sustained non-life-threatening injuries in the crash

Some of the people taken for medical treatment were in critical condition, ABC News reported.

All but six of those on the bus were taken to nearby hospitals, police officer Ray Wilson told a news conference, adding that their injuries were minor and treated at the site.

Passengers were trapped on board the bus, screaming as rescuers tried to get them out through windows, according to one witness who passed by the scene.

'It was horrible, there was people trying to climb out of the windows of the bus... bystanders trying to help people getting ladders out of their truck to get to windows of Greyhound bus to assist,' a witness told KRQE.

'When we went by the overturned semi, everything in the trailer was out on the road. It was a disaster...you could tell people were in distress, screams were coming from bus.'

Another motorist described the scene of the deadly bus crash as chaotic, with people screaming and passengers on the ground.

Chris Jones said in a phone interview that he was headed west on Interstate 40 near the Arizona state line when he saw the semi-truck on its side.

Jones says he stopped to help and talked to the driver who told him that one of his front tires had popped, forcing the truck to veer into oncoming traffic, where it struck the bus.

The bus was heading from Albuquerque to Phoenix and there were 49 passengers on board, Greyhound spokesperson Crystal Booker said.

It's not clear at this time whether that number includes the driver of the bus.

'The exact number of injuries is still being investigated,' NMSPD said at 5.30pm MDT, adding, 'This scene remains active.'

Six people with injuries too severe to be treated there were stabilized and taken to the University of New Mexico Hospital in Albuquerque.

Three of the six taken to UNMH were in critical condition but the condition of the rest had not been released, spokesperson Cindy Foster said.