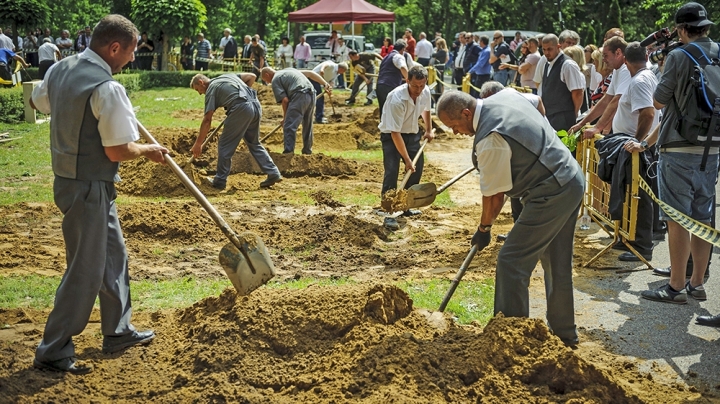 Digging their way to the top, 18 two-man teams of Hungarian gravediggers displayed their skills Friday for a place in a regional championship to be held in Slovakia later this year, says centralmaine.com.

Participants in the contest held in plot 37A of the public cemetery of the eastern Hungarian city of Debrecen were being judged on their speed but also getting points for style – the look of the finished grave mounds.

Organizer Iren Kari said they hoped the race would help increase respect and recognition for the gravediggers’ profession and attract more people to the job, which is under threat, for example by the increasing popularity of cremations.

All contestants had shovels, rakes, axes and pickaxes to dig graves, but no two teams seemed to use the same technique.

Some preferred to dig simultaneously, while others had one man digging while the other formed the dirt into neat piles around the gravesite. For safety reasons, like the collapse of a grave wall, only one member of each team was allowed to work in the grave after reaching a depth of 3 feet 3 inches.

After every team finished digging – the fastest time was just over 34 minutes – there was a short rest and then the dirt was shoveled back into the graves, each topped with a burial mound about the size of a large casket.

Some teams wore white shirts, ties and elegant vests, while others were in T-shirts or overalls. One pair wore plastic coveralls, but everyone was sweating by the end of the race on a warm spring day.

The winners, to be announced later Friday, will compete in a regional race planned to be held in November in Trencin, Slovakia.