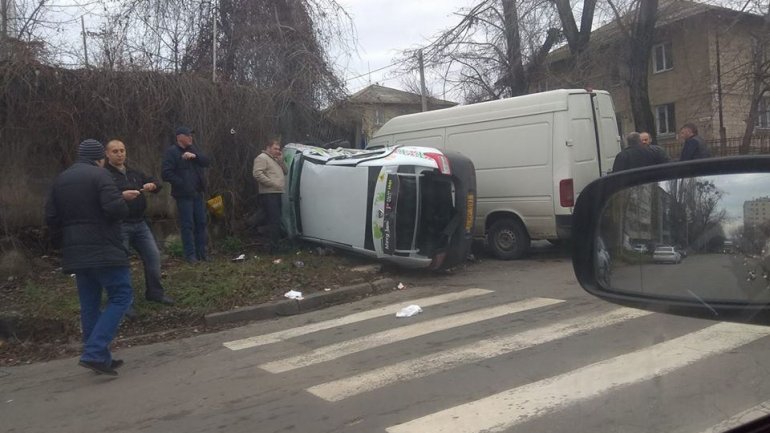 A taxi driver and his passenger have been taken to the hospital with grave injuries, after the vehicle they were in has violently collided with a minivan. The accident took place this afternoon, on Vissarion Belinski street, Buiucani sector of the Capital.

According to the police, the incident took place due to excessive speed. Moreover, neither the driver, nor the passenger has their seal belts on.

"I was going on the main road, while he, on the secondary one, who is guilty here? Of course it is him, he should have let me pass first. Moreover, the driver was chaotic and later collided with me and here we are" minivan's driver said.

Two ambulances were immediately dispatched, transporting the taxi driver and his passenger to the nearest hospital. Most damages received the 26-year-old passenger.

"Both received grave injuries. The woman has craniocerebral trauma, with suspicion of having fractured some vertebra in the neck region. They will both be admitted for at least five days" press officer of Chisinau Emergency Medicine Institute, Petru Craveţ said.

Law enforcement claim that the 52-year-old taxi driver is the at fault for producing the accident.

"He attempted to dodge, having noticed the other vehicle at the last moment. The biggest problem was the speed and the fact that neither of them were buckled in. The taxi driver will face responsibility for the passenger and for causing the accident" chief patrol inspector, Valeriu Munteanu said.

Nearby residents claim that the intersection is dangerous and accident often take place there.

If found guilty, the driver will receive a criminal file.

Works carried out for months and uncompleted on Alecu Russo