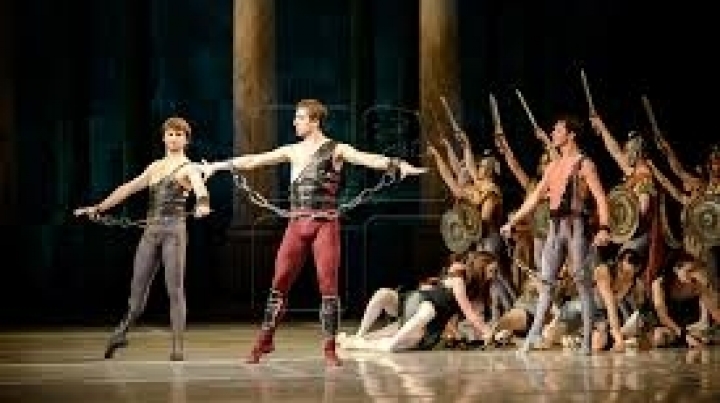 Grace, artistry and a love story full of suspense. The "Spartacus" ballet was played for the first time in Chisinau, in the International Festival of Opera and Ballet "Maria Biesu".

Memorable moments have been provided, especially for 35 teenagers from "Blessed Joseph" orphanage in the capital. Many of them saw such a show for the first time in their lives.

Dancers from Romania and Japan said they have experienced special emotion on stage in Chisinau, even if they performed worldwide.

"I dance in the "Spartacus" show for the first time and I am very happy. Until now I have trained and I want to convey these sentiments to the public" ,  said ballerina, Kotomi Hoshino.

"To me they're very nervous. This is a show very very difficult show. I am happy that they called me, it's my second time here in Chisinau" , said dancer Vlad Marculescu.

Vlad Plahotniuc's "Edelweiss" Foundation has surprised teenagers from "Blessed Joseph" orphanage in the capital: has brought them to the ballet show.

"It is already a tradition for us every year to offer more than a hundred tickets for children to shows. We offer tickets to children from orphanages, boarding schools, even from socially vulnerable families, where parents can not afford such tickets" , said project coordinator Edelweiss, Viorica Turcan.

Teens say they left the show with no words:

"The first part was very interesting. I hope the second part will be as interesting. The movements are very beautiful, and I'd like to become so."

"I was most impressed when Spartacus was brought. This moment was the most exciting."

The hall was filled to capacity. The audience was impressed with the performance of ballet dancers and applauded for minutes on end:

"Overall, the show is nice, the acting is wonderful. I enjoyed the show."

International Opera and Ballet Festival "Maria Biesu" is at its 24th edition. It will end on September 18th. The event is organized with the support of Vlad Plahotniuc's "Edelweiss" Foundation and conducted under the auspices of Prime Minister Pavel Filip.