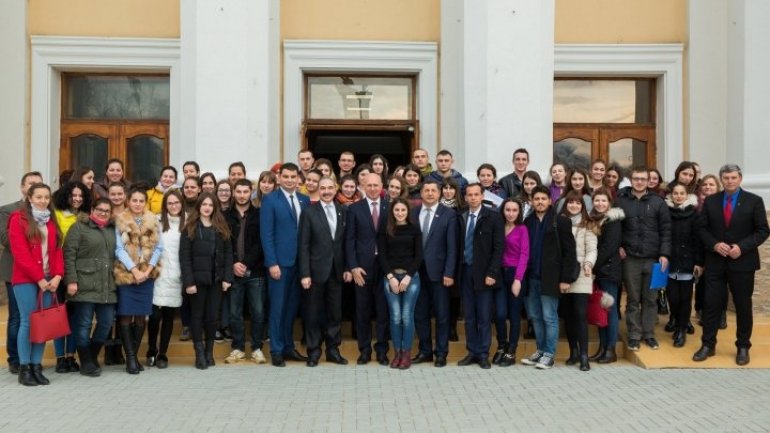 Up to 10% of the scholarship fund will be offered to student governance structures to motivate volunteering and civic engagement. This initiative was announced today by Prime Minister Pavel Filip at the meeting with students and professors from Bogdan Petriceicu Hasdeu State University in Cahul.

The students welcomed this idea, noting that such scholarships would motivate them even more to engage in extra curricular activities.

The head of the Government also congratulated the young people on the International Student Day celebrated today. Pavel Filip wished them success in their work, noting that the Government was concerned about creating the necessary conditions for young people to develop their skills and become good professionals.

The prime minister spoke about the reforms promoted by the Executive, emphasizing the measures taken in the field of education. Pavel Filip said that this area was a priority for the authorities, and recently the process of evaluating the actions undertaken so far to identify a viable vision of further modernization of the education system was launched.

"Education for the Republic of Moldova is a basic pillar, which will ensure the future of this country. That is why we have a fundamental and not superficial approach to the implementation of the reforms," the prime minister said.

During the dialogue, teachers talked about the problems they face in their work, including insufficient funding and lack of places to practice.

In the context, the prime minister said that these issues were already in the hands of the Government and they were looking for solutions to overcome them.

The Bogdan Petriceicu Hasdeu State University in Cahul was created in 1999. Currently, there are three faculties within the institution, with 1500 students studying.