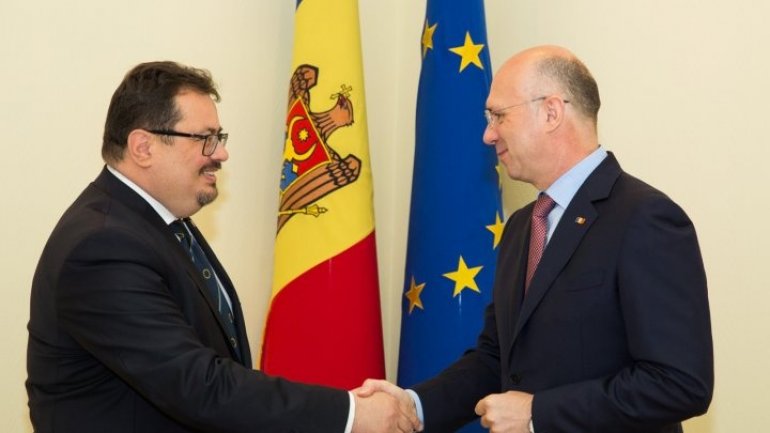 The fulfillment of the commitments of the Moldova-EU Association Agreement was discussed at today's meeting of Prime Minister Pavel Filip with the head of the EU Delegation to Moldova, Peter Michalko.

Officials have analyzed progress and backlogs of agenda , finding that the multitude of Moldova-EU meetings in recent weeks has provided a clear image of the current affairs.

In this regard, Pavel Filip assured the European official the effort to boost the reform agenda. In particular, emphasis was put on the approval of the laws provided by the Association Agreement and the conditions for obtaining macro-financial assistance.

"The conditions for granting macro-financial assistance will be met by the end of the year. We are very ambitious and determined to achieve this goal, "said Pavel Filip.

In turn, Ambassador Peter Michalko appreciated the Government's actions regarding the implementation of reforms and progress in various fields.

At the same time, the European official encouraged the Executive to continue reforms in the field of justice, fighting corruption and strengthening the rule of law.

"The purpose of the Government's reform is to have competent public institutions, all the policies developed to be visionary and qualitative," the Premier said.

Pavel Filip also referred to the creation of the Public Service Agency, which is meant not only to provide better quality services in optimal time, but also to exclude the necessity of obtaining and presenting different certificates by the citizen.

"The only document of the citizen in relation to the state must be the identity card, the rest of the information should be found in the state registers", the Prime Minister has stated.

The officials also exchanged views on the settlement of the Transnistrian conflict in the 5 + 2 negotiations format, mentioning the importance of trust strengthening between the population on both sides of the Dniester.