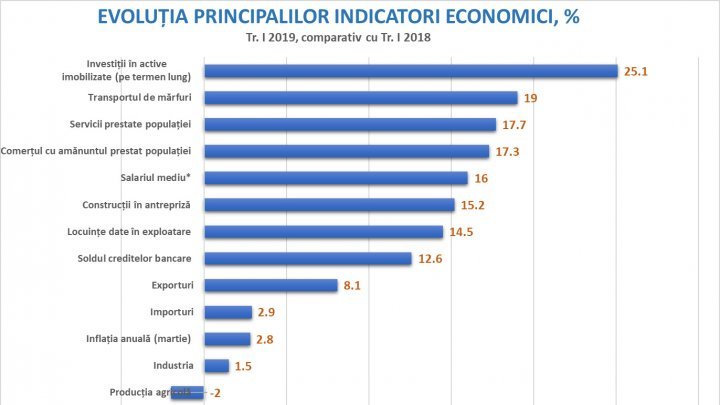 Moldovan economy demonstrated a good resistance capacity to the political instability caused by parliamentary election.
The registered results in the first quarter are a bright example to that. Also, this doesn't mean that the political instability should last. The longer it lasts, the more visible are the negative effects on the economy. All the blame must assume the crisis initiators, reports PoștadeȘtiri.

For now, we can tell that our economy is going well. According to the official statistics, the majority of the economy indexes are growing. Only the agricultural sector registered negative results in the first quarter, but it can be fixed by the new agricultural season.

For now there are no available data about the evolution of the average salary, but mentioning the last year's Government's salary reform, but also the fiscal reform that allowed the fiscal taxes, the estimated salary growth is about 15-16% in comparison with the first quarter of 2018.

Conclusion: there are all the premises that the economy will continue it's growth, even to keep the average rythm of the last years - of 4% advance of the PIB. A lot depends on the Parliament's deputies, on their capacity to overcome the crisis and to install a functional Government.
AFLĂ imediat Știrile Publika.MD. Intră pe Telegram