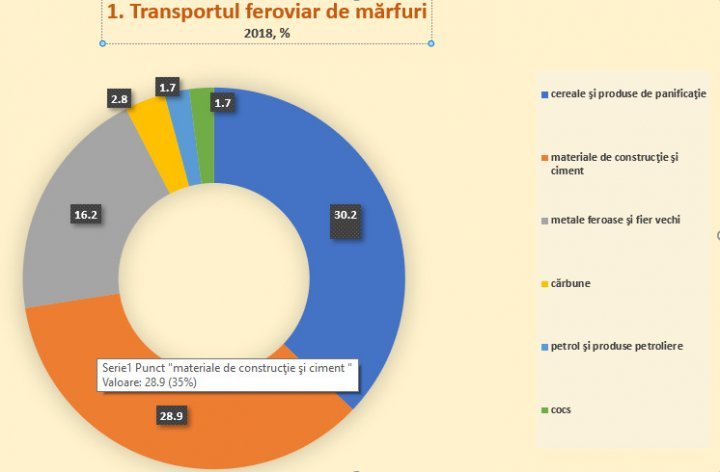 According to Facebook page PoștadeȘtiri, the figures are impressive how minor investments can enable use to operate such major project.

We realize that this program, launched by Government of Filip, is the best thing ever we have in Moldova after almost 30 years of independence. Clearly there are mistakes for large projects even they are carried out by Government. What is more important is Government are analyzing them so to avoid in 2019.

An economy without infrastructure investment is weak - it's almost a legacy. Therefore, massive of involvement of Government to enhance roads will have strong impact for the next years.

I will only refer to a few public statistics to show how Government's investment in road repair has practically provided the economy with another engine", said Grigore Condurache, deputy director of Moldovan Railways.

In 2018, according to data from the National Bureau of Statistics, the share of this commodity group increased by 5.5% in the structure of rail freight transport - from 23.4% to 28.9%.

Therefore, taking into account the increase of the program Good Roads, the initiation of the Ungheni-Chisinau gas pipeline project, the dynamics of the construction sector, the transportation of building materials will become the main activity direction for the Moldovan Railways. Similar effects will also be attested in road transport.

Good Roads has also boosted demand for building materials, including limestone, and this is also a positive boost for the extractive industry.

For example, in 2018, the mining industry grew by almost 10%, more than 6% above the general industry growth. In fact, it is the leading sector after developments over the past year, a trend that will be maintained this year as well.

The increase in production volume in the mining sector has also positively influenced employee wages. For example, in the fourth quarter of 2018, mining industry recorded the largest increase in industry wages, compared to the same quarter of 2017. It is an advance of nearly 21%. This rhythm of growth is one of the fastest and most of the national economy.

Statistics are on the surface. The ambitious government program for road infrastructure renovation contributes to the revival of the entire economy.

And the results will be more visible at the end of this year, but also in the coming years, with important influences in terms of investment, but also business development, tax payments and wage developments," writes Facebook page PoștadeȘtiri.