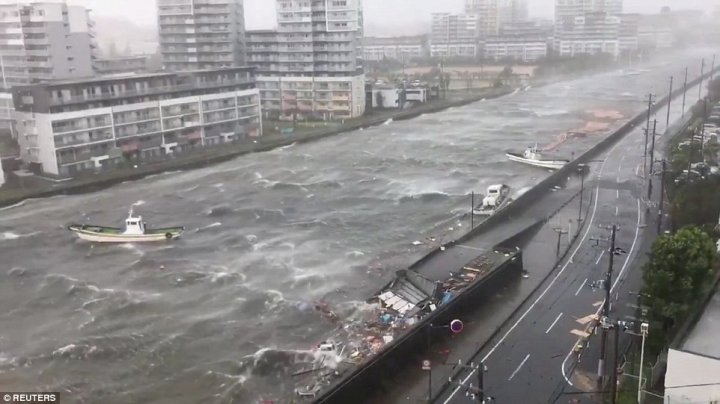 Giant waves, 135mph winds and heavy rainfall have lashed Japan today with more than a million people urged to evacuate amid the worst storm to hit the country in 25 years.

Typhoon Jebi hammered the west coast as it made landfall in the latest severe weather to hit the country this summer following rains, landslides, floods and record-breaking heat that killed hundreds of people.

Dramatic video has emerged showing the roof of Kyoto train station crashing down into the concourse below sending commuters sprinting for safety amid powerful gusts. Separate images show massive waves cascading over sea walls, upturned boats and debris drifting in flood water and trucks flipped onto their sides on motorways.

Tides in some areas were the highest since a typhoon in 1961 with flooding covering the runways at Kansai International Airport in Osaka.

The strong winds sent a 2,591-tonne tanker crashing into a bridge connecting the airport, built on a man-made island in a bay, to the mainland. The bridge was damaged but the tanker was empty and none of its crew was injured, the coast guard said.

Japan's weather agency has issued warnings about possible landslides, flooding and violent winds, as well as high tides, lightning and tornadoes across western Japan including Osaka and Kyoto.

Evacuation advisories were issued for 1.19 million people in western and central Japan, with another 16,000 people issued with stronger but non-mandatory evacuation orders, the fire and disaster management agency said.

Prime Minister Shinzo Abe urged people to 'evacuate early' and ordered his government to take all necessary measures to protect residents. There were scattered reports of mild injuries as the typhoon made landfall.

Television footage showed waves pounding the coastline, sheet metal tumbling across a parking lot and a truck turned on its side. People in Kobe reported on Twitter that the wind was shaking their apartment buildings and ripping branches off trees.

Around 3.9 ins of rain drenched one part of the tourist city of Kyoto in an hour, with as much as 20 ins set to fall in some areas in the 24 hours to noon on Wednesday.

With winds of up to 100 mph at its centre, Jebi - whose name means 'swallow' in Korean -  was briefly was briefly a super typhoon but it now being classed as a 'very strong' typhoon, the weather agency's chief forecaster Ryuta Kurora said.

In the hours before the storm made landfall, Shikoku, one of four Japanese main islands, was already experiencing 'violent storms and the storms will get stronger and stronger,' he added.

As the storm approached, Abe called a disaster response meeting and cancelled a trip to western Japan.

'I urge the Japanese people to take action to protect your lives, including preparing and evacuating early,' he said.

He instructed his cabinet to 'take all measures possible'.

Primary and middle schools in affected areas were closed while regional businesses also reacted quickly, with a major railway firm and Universal Studios Japan in Osaka shutting down for Tuesday.

Some 177,000 customers across western Japan lost power, the Ministry of Economy, Trade and Industry said. Toyota Motor Corp said it was cancelling the night shift at 14 plants.

The capital, Tokyo, will be far from the centre of the storm but was set for heavy rains and high winds by the end of Tuesday.

More than 700 flights were cancelled, including several international flights departing and arriving at Nagoya and Osaka, along with ferries.

Shinkansen bullet train services between Tokyo and Hiroshima were suspended and Universal Studios Japan, a popular amusement park near Osaka, was closed.

Jebi has a similar trajectory to Typhoon Cimaron, which made landfall on August 23, disrupting transport links but causing limited damage and few injuries.

Japan is currently in its annual typhoon season, and is regularly struck by major storm systems during the summer and autumn.

The country has been sweating through a record deadly heatwave that followed devastating rain in parts of central and western Japan that killed over 200 people.

The sustained rain caused widespread flooding and landslides in July, devastating entire villages and forcing thousands from their homes.

The flooding and landslides proved so deadly in part because many people did not heed evacuation advisories, which are not mandatory.

Since the disaster, authorities have urged people to take evacuation warnings more seriously and prepare to evacuate immediately when the warnings are issued.