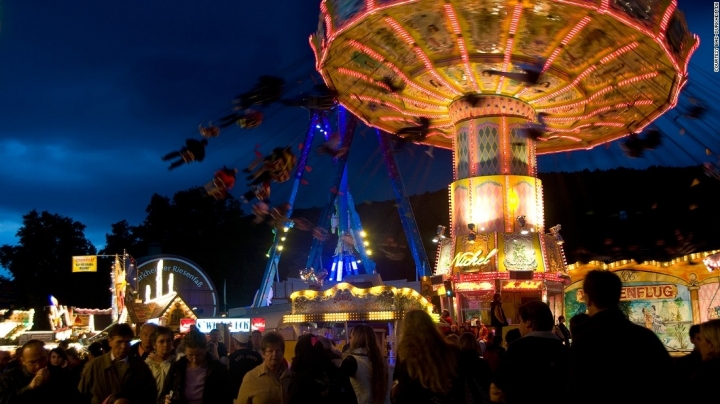 If there is a more appetizing aroma than the whiff of a sizzling sausage, then my nose hasn't smelled it yet.

All around me there are food stalls hot with barbecues of Bratwurst, large skillets of smoked Knackwurst sputtering fat, grates full of finger-like Nuremberg sausages over open fires, plus cauldrons of boiling frankfurters -- and these are just the ones I can pronounce, CNN reports.

I'm in the Wurstmarkt grounds in Bad Durkheim, a village in Pfalz near the start of Germany's famed Wine Route, and my nostrils are inhaling heaven.

Although Wurstmarkt means "sausage fair," this happens to be the biggest wine festival in the world with 685,000 visitors last year.

The heart of the festival is a grid with 36 historic local wineries going back centuries and an adjoining wine village for more than 100 young pretenders.

With people sitting in tents at long tables, it resembles Oktoberfest -- except that instead of vast mugs of beer, they're knocking back glasses of Riesling, Pinot and Gewurztraminer.

Wine is served in half-liter measures for about $6, which is why people come in large groups, buy one glass each and pass the wine around.