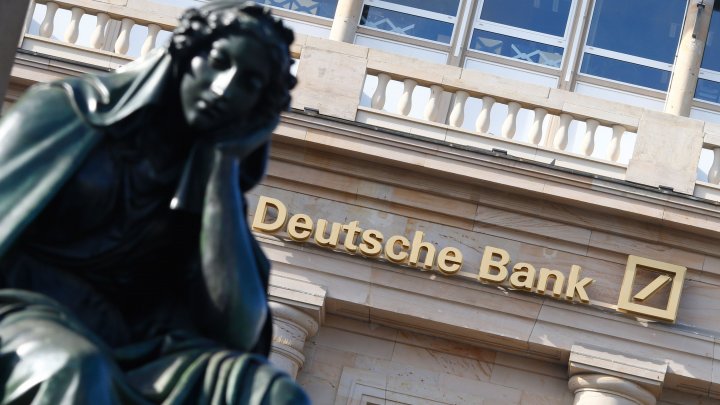 foto: Deutsche Bank AG is looking into possible money laundering transactions by some of its clients in Russia which could exceed US$6 billion, a source familiar with the matter told Reuters on Friday. PHOTO: BLOOMBERG
AFLĂ imediat Știrile Publika.MD. Intră pe Telegram

Germany’s troubled Deutsche Bank faces fines, legal action and the possible prosecution of “senior management” because of its role in a $20bn Russian money-laundering scheme, a confidential internal report seen by the Guardian says.

The bank admits there is a high risk that regulators in the US and UK will take “significant disciplinary action” against it. Deutsche concedes that the scandal has hurt its “global brand” – and is likely to cause “client attrition”, loss of investor confidence and a decline in its market value, writes The Guardian.

Deutsche Bank was embroiled in a vast money-laundering operation, dubbed the Global Laundromat. Russian criminals with links to the Kremlin, the old KGB and its main successor, the FSB, used the scheme between 2010 and 2014 to move money into the western financial system. The cash involved could total $80bn, detectives believe.

Shell companies typically based in the UK “loaned” money to each other. Companies then defaulted on this large fictitious debt. Corrupt judges in Moldova authenticated the debt – with billions transferred to Moldova and the Baltics via a bank in Latvia.

Deutsche Bank was used to launder the money via its corresponding banking network – effectively allowing illegal Russian payments to be funnelled to the US, the European Union and Asia.

The bank was entirely unaware of the scam until the Guardian and Organised Crime and Corruption Reporting Project (OCCRP) broke the story in March 2017, the report says. The first it knew was an email from the Guardian and Germany’s Süddeutsche Zeitung newspaper asking for comment.

“Only with this intelligence received is it now possible for Deutsche Bank to start global investigations,” it notes.

In the embarrassing aftermath, the bank asked two in-house financial crime investigators – Philippe Vollot and Hinrich Völcker – to find out what had gone wrong. Their nine-page presentation was shared last year with the audit committee of the bank’s supervisory board and is marked “strictly confidential”.

As part of its investigation, Deutsche Bank sent 149 “suspicious activity reports” to the National Crime Agency in London. Similar disclosures of potential money-laundering transactions were made to authorities in the US and elsewhere – with 30 private and corporate Deutsche Bank clients reported. Some may have been “unknowingly used”, the report says.

The affair is a further blow to Deutsche Banks’s ailing reputation. It comes amid police raids on its Frankfurt HQ over the Panama Papers, a plunging share price and talks over a possible merger with Germany’s Commerzbank. The raid last November came after German prosecutors alleged two bank employees helped clients launder money via offshore firms.

Deutsche is also under scrutiny in Washington over its financial dealings with Donald Trump. On 15 April, Democrats from the House intelligence and financial services committees issued a subpoena, demanding the bank provide documents about its lending to the president.

Over two decades, Trump borrowed more than $2bn from Deutsche. In 2008, he defaulted on a $45m loan repayment and sued the bank. Its private wealth division in New York subsequently loaned Trump a further $300m – a move that bemused insiders and which has yet to be fully explained.

In recent years, the bank has had a series of bruising encounters with international regulators. Between 2011 and 2018, it paid $14.5bn in fines, with exposure to dubious Russian money a regular theme.

In 2017, the UK’s Financial Conduct Authority imposed its largest fine – £163m – after Deutsche carried out a $10bn “mirror trade” scheme run out of its branch in Moscow. The New York Department of Financial Services (DFS) fined the bank $425m over the same case, in which roubles were converted into dollars via fake trades on behalf of VIP Russian clients.

Deutsche carried out an internal investigation into the “mirror trades” affair, “Project Square”. The leaked Global Laundromat report says there is “no systematic link” between the two Russian money-laundering schemes. However, it suggests some overlap. Two unnamed entities feature in both and 46 “mirror trade” entities “directly transacted” with 233 laundromat ones.

The leaked report says Deutsche has cleaned up its act. It says it has stopped doing business with the two banks at the centre of the Laundromat scandal – Moldova’s Moldindconbank and Latvia’s Trasta Komercbanka. Regulators in Latvia closed down Trasta in 2016 because of serial money-laundering violations.

Deutsche Bank says it has “reduced its footprint” across the post-Soviet region. It no longer has relationships with any banks in Moldova, Latvia, Estonia and Cyprus, the report says. All are favourite destinations for illicit Moscow money. The bank has scaled down its business activities in Russiaand Ukraine, it says.

The bank is under investigation for its role in Europe’s biggest banking scandal, involving Denmark’s Danske Bank. Danske laundered €200bn (£178bn) of Russian money via its branch in Estonia. Deutsche provided correspondent banking services via its US subsidiary.

Deutsche Bank said it could not comment on “potential or ongoing investigations”, or on “any matters regarding our regulators”. It said it was committed to providing “appropriate information to all authorised investigations”.

The bank said: “We have considerably increased staff numbers in anti-financial crime and more than tripled our staff since 2015. Since 2016 we have invested €700m in upgrading our key control functions there.”