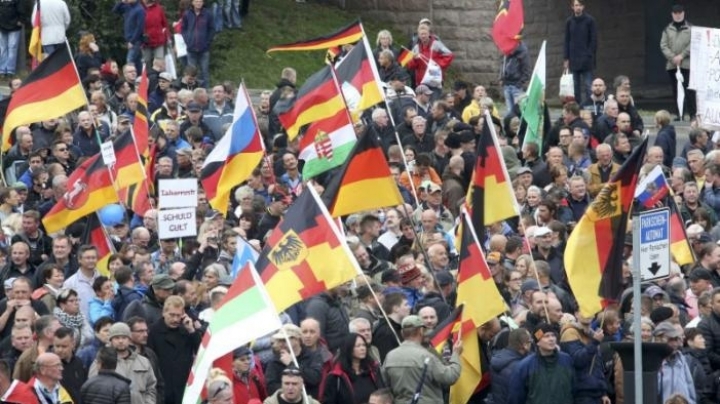 Germany celebrated 26 years of reunification on Monday, but not everyone was convinced there was much to celebrate, reports The Washington Post.

In Dresden, eastern Germany's largest city, protesters called German Chancellor Angela Merkel and other politicians "traitors" and shouted "Merkel must go." Those slogans have become common in the city, where anti-foreigner demonstrations have taken place every Monday for about two years now. In a tweet, the regional government of Saxony, which hosted the ceremony this year, condemned the slogans Monday morning, saying officials were "saddened and ashamed."

Only a handful of people attended the demonstration. But their shouting put a painful public spotlight at the continuing divisions within Germany. Many eastern Germans feel left behind and excluded from the economic prosperity in the west. But some western Germans have accused their eastern neighbors of complaining without being willing to embrace change.

No issue has caused more tensions than the influx of refugees into Germany last year. Eastern Germany has taken in far fewer refugees than western Germany. Yet, it was in the country's east where xenophobic attacks spiked.

While 75 percent of Germans who live in the east said in 2014 that they considered their country's reunification a success, only half of western Germans agreed. With eastern and western Germans blaming each other for past mistakes over the last two years, that frustration has likely increased.

Younger citizens, especially - who do not usually identify themselves with their area of origin as strongly anymore - have grown worried about the persistent skepticism on both sides.