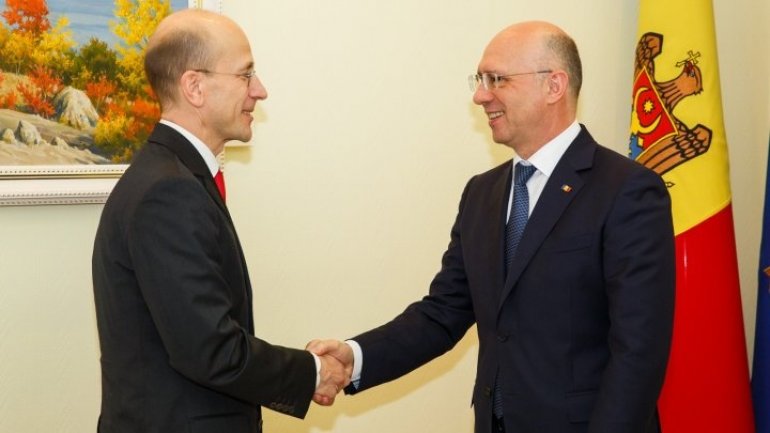 The reform of the Republic of Moldova, the Moldovan-German cooperation and the priorities of the 2018 Government have been discussed today by Prime Minister Pavel Filip and Ambassador Andreas Peschke, Representative of Eastern Europe, Caucasus and Central Asia at the Foreign Ministry of Germany.

The Head of the Executive spoke about the social reforms implemented by the Government, about efforts to improve the business environment, and about the reform of the local public administration. In the context, the prime minister specified that although the year 2018 is an electoral one, the government is going to keep away from the campaign, and remains focused on achieving the reform agenda.

Priorities for next year are justice, education, with a special focus on road infrastructure.

In turn, Ambassador Andreas Peschke appreciated the efforts of the Government, encouraging the continuation of the reform process. The official also noted the strengthening of the Moldovan-German collaboration, mentioning both the advancement of the political, economic and cultural dialogue.

"We succeeded both in Chisinau and in Berlin to highlight the quality of our relations. We want to continue working together in the same spirit," the diplomat said.

At the same time, Andreas Peschke appreciated the constructive role of the Republic of Moldova in organizing the Eastern Partnership Summit, emphasizing that our country had a fair approach and focused on concrete results within this forum.

A special topic of the talks was the advance in the Transnistrian settlement process, and the agreements reached between Chisinau and Tiraspol at the end of November were welcomed.

"The progress achieved is due to the working groups focused on each segment and the involvement of Ukraine. We are currently looking for solutions to the issue of Transnistrian registration plates, and we will focus on security issues and a special status for the region," said Pavel Filip.
AFLĂ imediat Știrile Publika.MD. Intră pe Telegram