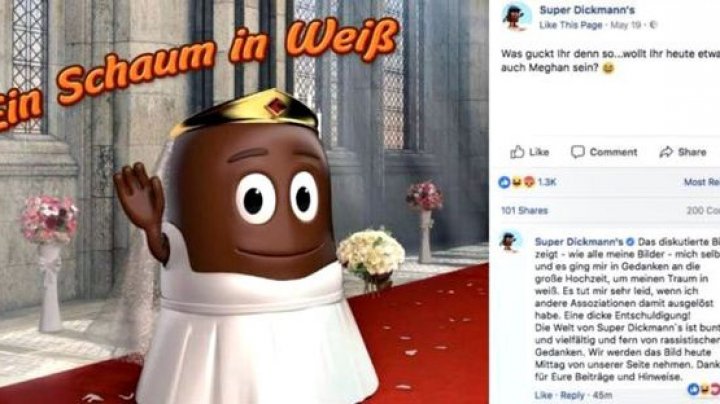 A German firm have deleted a post on social media referring to Meghan Markle after they were accused of racism, said Mirror.

The company also has apologised after posting the image.

Super Dickmann posted a image of a chocolate-covered marshmallow sweet in a bridal dress on the day the Duke and Duchess were wed.

The caption to the photo read, in German:"What are you looking at? Wouldn't you also want to be Meghan today?"

Meghan Markle, 36, is mixed race with a black mother and a white father.

A spokesman for the company told the BBC the post was "stupid and embarrassing".

The image of the Schokokuss, a well-known German sweet, appeared inside a cathedral with the words "a foam in white", a reference to its creamy interior, a pun on the phrase "a vision in white".

After the post was slammed online Super Dickmann wrote: "A big pardon! The world of Super Dickmann's is colourful and diverse and far from racist thoughts."

German broadcaster ZDF have also been under fire online and accused of racism after they referred to Meghan Markle as 'exotic' several times, said the Queen was 'turning a blind eye to Meghan' and that the gospel singers "sang beautifully black", reports the BBC.