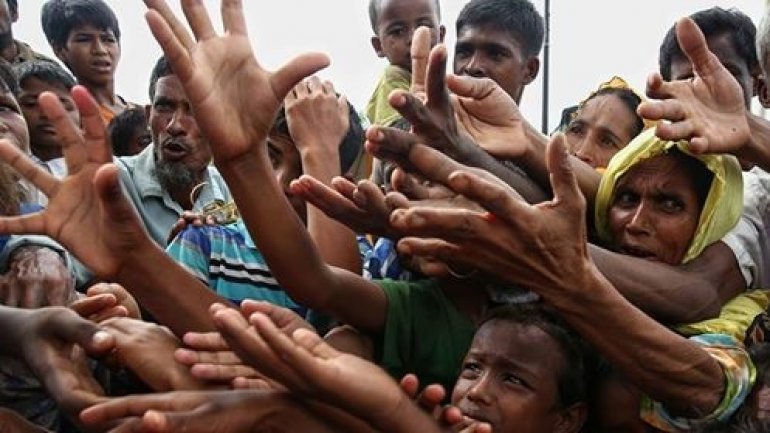 More and more refugees cross the boarder to Bangladesh in attempt to escape  the mass killings they say are being perpetrated against their people.

The UN estimates that, in just one week, almost 50,000 Rohingy, a stateless, ethnic Muslim minority who largely inhabit Myanmar's western Rakhine state, have fled due to escalating violence.

Around 27,000 refugees have crossed into Bangladesh since last Friday, and a further 20,000 remain stuck in no-man's land between the two East Asian nations.

On Thursday, the bodies of 20 Rohingya were pulled out of the Naf River, along the border of Myanmar and Bangladesh. Twelve of the dead were children.

"They are beating us, shooting at us and hacking our people to death," Hamida Begum, one refugee who has left everything behind in a desperate attempt to flee with at least their lives, told CNN.

Government officials said Thursday that at least 399 people had been killed in fighting since last Friday. Of those, 370 they claim to have been "terrorists". However, activists say the military has killed women, children and innocent men.

Both sides also blame each other for torching houses. The government says Rohingya militants have burned down more than 2,300 homes. The Rohingya says it's the military that have been attacking their houses.
There are many ethnic groups in Myanmar "but only the Rohingya are hated by the government," said Mohammad Harun, who was among those fleeing.
The Rohingya are a minority Muslim population in Myanmar, however they're denied the right to citizenship despite having lived there for generations.
Aid organizations and the UN have slammed the Myanmar government for its treatment of the group.
"Decades of persistent and systematic human rights violations, including the very violent security responses to the attacks since October 2016, have almost certainly contributed to the nurturing of violent extremism, with everyone ultimately losing," Zeid Ra'ad Al Hussein, UN High Commissioner for Human Rights, said Thursday.
"We have no food and no clothes. We are homeless," said refugee Mohammed Harun. He says he cannot go back -- the military has destroyed their food supplies, razed their homes.
"Everything, destroyed by the military. Now we are without food or blankets."
"Genocide is going on there."
Many left their homes with just the clothes on their backs, bringing with them only stories of murder, rape and villagers torched.
"I could not bring anything," Romiza Begum says, her white hair peeking out from beneath her patterned headscarf, one of the items of clothing she had to accept as charity.
"These clothes were given (to me) by someone here. I asked for clothes. I lost everything. There is nothing left in my home in Burma. Everything is destroyed."
Last year, as many as 85,000 Rohingya crossed the border following a similar spate of violence.
AFLĂ imediat Știrile Publika.MD. Intră pe Telegram