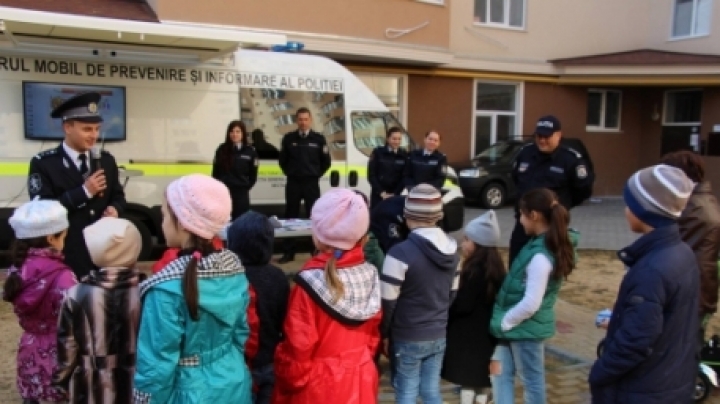 The awareness campaign entitled "Cops dads, play with the little ones" was launched on October 9th. The activity was held in the courtyard of an apartment in Buiucani sector.

The campaign aims to increase the participation of police officers in child care and education. This includes the application of friendly practices in communication with children, exclusion of gender stereotypes, increase of confidence among parents regarding the activity and image of the police in society.

Both children and dads that are cops were actively involved in the informational and educational games.

The Mobil Prevention and Information Centre of the Police was involved in the activity, through which children watched video clips with anti-victimization messages.

The children received gifts and sweets from police and parents and informational material recommendations have been also distributed.

Therefore, the stereotypes that the police is an organ of coercion was excluded. In this context, the children understood that the allegations: "If you don't study, I will call the police", "If you do not listen, the police will take you"; "the uncle Cop will be called, if you don't behave" often used in the child's education, are not the most suitable.

The campaign will last until mid-November and was started on the initiative of the General Inspectorate of Police throughout the country.

A series of activities under the campaign were conducted and was attended by over 550 children and parents with the involvment of police from Police Inspectorates Singerei, Balti, Comrat, Calarasi, Taraclia and Soldanesti villages.