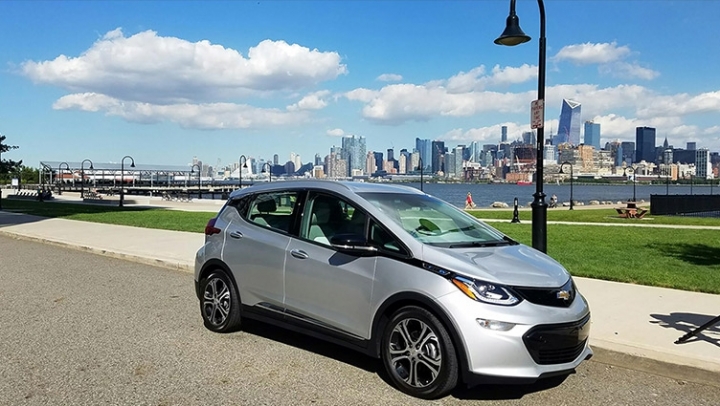 That's enough to drive from New York City to Washington DC or nearly enough to make a round trip between Los Angeles and San Diego.

Perhaps more importantly to GM, it beats the 215 miles Tesla has promised for its upcoming Model 3, a similarly-priced electric car that's expected to go on sale next year.

Sales of the Chevrolet Bolt are scheduled to begin before the end of this year.

While the Bolt's name is very similar to that of another GM (plug-in car, the Chevrolet Volt, the two cars operate very differently. While the Volt can go over 50 miles on a charge, it has a gasoline engine to generate power for longer drives. The Bolt is purely electric. The Bolt's price will start at under $37,500, GM has said, a price that would effectively make it cost under $30,000 with federal tax incentives.

The Model 3 will be priced about $35,000, Tesla has said. Tesla has already received hundreds of thousands of pre-orders for its car.

The Bolt is powered by a 200 horsepower electric motor which will enable it to go from zero to 60 in under seven seconds, which is quick for a small car. Top speed will be about 91 miles per hour.

To help maximize the Bolt's range, it's made from lightweight materials such as aluminum, magnesium and carbon fiber.

Like some other plug-in and hybrid cars, the Bolt has a one-pedal driving mode which will extend its driving range by about 5%, GM has said. When that mode is selected, lifting a foot off the accelerator pedal immediately initiates regenerative braking, in which electric motors are used to slow the car. That also generates a small amount of electricity that slightly recharges the battery. Ordinarily, regenerative braking is only initiated by pressing on the brake pedal. One pedal operation eases driving in slow moving or stop-and-go traffic in addition to increasing energy efficiency.