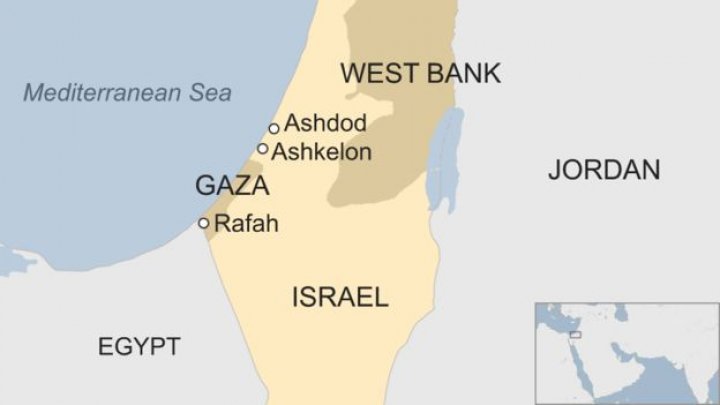 There has been a lull in hostilities in the Gaza Strip after Palestinian militants said that a ceasefire with Israel had been agreed.

It comes after a weekend during which Palestinian militants launched hundreds of rockets into Israel prompting retaliatory air and artillery strikes.

At least four Israelis and 23 Palestinians were killed.

Israel has not confirmed the truce, but its military has lifted emergency measures in place in southern Israel.

The violence flared up on Friday during a protest against the blockade of Gaza.

A TV station run by Hamas - the militant movement which controls Gaza - announced that both sides had agreed the ceasefire, beginning at 04:30 local time (01:30 GMT).

Egypt is said to have brokered it - assisted by the United Nations and Qatar.

The Israel Defense Forces (IDF) has not mentioned the truce. However, the military said it had lifted protective restrictions imposed on residents in southern Israel since the flare up began, including schools reopening.

Early on Monday the IDF said militants had fired 690 rockets into southern Israel during the past 48 hours - 240 of which had been intercepted by the country's Iron Dome missile defence system.

In response, Israel had targeted 350 sites belonging to Hamas and Islamic Jihad, the IDF said.

On Sunday, Israeli Prime Minister Benjamin Netanyahu said he had ordered the military to "continue its massive strikes on terror elements" in Gaza.

Mr Netanyahu says the country's forces around the strip would be "stepped up with tank, artillery and infantry forces".

Israel had also closed all schools within 40km (25 miles) of the Gaza strip and opened some shelters to the public.

Monday's lull comes as the holy month of Ramadan begins for Palestinian Muslims and as Israel prepares to mark its memorial day and independence day.

What do we know about casualties?

Four people have so far died from the violence in Israel:

The Gaza health ministry says 23 Palestinians have died across the weekend. Most of the deaths came on Sunday. The Islamic Jihad group said seven of the dead were its members.

Civilians, including a 12-year-old boy and two pregnant women, were also among those reportedly killed.

Israel has contested the account of the death of one woman and her 14-month-old niece on Saturday. They blamed their deaths on a Palestinian rocket that fell short of its target.

On Sunday, the Israeli military admitted a targeted assassination of a Hamas commander named Hamed Hamdan al-Khodari - sharing a video of the apparent moment they hit his car.

The sites Israel says it has destroyed include a multi-storey building in Gaza City, which it said included Hamas intelligence offices.

On Sunday night, Hamas leader Ismail Haniya said in a statement that "returning to a state of calm is possible" if Israel committed to a "complete ceasefire".