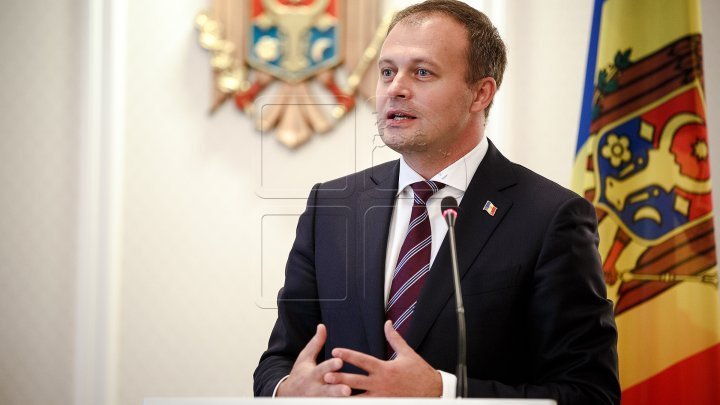 President of Moldovan Parliament, Andrian Candu, participated today in a meeting commemorating 100 years since the Union of Bessarabia with Romania. In his speech, the official declared that it is a historic event that must be treated with dignity and respect.

"It was a courageous act made by former politicians, among whom were members of the Democratic Parliament at the time. National Council voted on March 27 2018 the Union of Bessarabia with Romania. Among those who were not scared to vote, 86 wished for the union to take place. It happened within a difficult context and the reintegration lasted only 22 years. Today, despite current challenges, we are in an ample process of modernization and democratization, unfolding difficult reforms, where we even pay for political errors and inconsistency, but I wish to assure you that Republic of Moldova needs a strong Romania on this path" President of Moldovans Parliament declared.

Mister President of the Senate,

Mister President of the Chamber of Deputies,

Your Royal Majesty, Custodian of the Crown of Romania,

Parliament of Republic of Moldova expresses its gratitude to Presidents of the Senate and Chamber of Deputies for being invited to this event that takes place today in Bucharest and for the hospitality. It is a great honor for me to stand here today.

We have gathered to commemorate a historic event and such we must treat it - with respect and dignity. It was a courageous act made by former politicians, among whom were members of the Democratic Parliament at the time. National Council voted on March 27 2018 the Union of Bessarabia with Romania.

Constantin Tănase, former journalist and politician from Moldova, has mentioned in one of his articles that we, those who live in Republic of Moldova, have a duty to bring to light the actions made by the National Council. To make sure to treat this gesture with respect, not only to commemorate the heroes of our nations, but also for ourselves, for the future generations.

The union took place within a difficult context and the reintegration lasted only 22 years. It is true that due to this historic declaration, Bessarabia evaded famine and deportations from the 1930s, but paid for it in the '40s when Bessarabia was once again annexed through the Molotov–Ribbentrop Pact.

We will appreciate this historic event, because we have faced much hardships throughout centuries, when history was written and rewritten, to accommodate those who led us at the time.

At 100 years since the Great Union from 1918, we are unfortunately facing once again the wish of some to decide for us - how we should live and where we should be headed. Through various methods, direct of indirect, through modern tools and hybrid warfare, some try to convince our citizens that there is no place for Republic of Moldova in Europe, but elsewhere.

Economic and politic pressure from outside wishes to destroy European and Romanian values, while the propaganda that I speak of, driven by morality, ideology and finance, highlights the declarations of sovereignty and independence of Republic of Moldova and wishes it to return in Russia's geopolitics.

Inoculation of ideas belonging to foreign values, far from the European ones, by feeding people with unjustified nostalgia hidden among political and economic criticism we had, that we politicians are blamed for, is threatening the fragile security in the region.

Relations between Republic of Moldova and Romania are based on our common language, history, civilization and culture. They have deep emotional meanings. From here are drawn the diversity in opinions and geopolitics.

Today, despite the current challenges, we are in ample process of modernization and democratization, unfolding difficult reforms, where we even pay for political errors and inconsistency, but I wish to assure you that Republic of Moldova needs a strong Romania on this path.

We cannot let perspective divergence and opinions influence us.

For Moldova, the relations we have with the political class of Romania, in terms of privileged characters and support in European integration, is crucial, as the only option for civilization and development.

It must be achieved through teamwork, open and transparent, along with Romania's partners from the European Union, United States of America and other states with a similar vision. Only this way we can ensure prospective from the citizens from Republic of Moldova.

Romania must remain the most loyal, solid and honest partner of Chisinau on its European path. We no longer have time to stumble and miss opportunities, because the more divided our society is, the less chances we have for perspectives of fast modernization.

Often the relations between Romania and Moldova, the official ones, not among people, in place of bringing us close, divided us.

There was much prejudice and cliche both in Chisinau and Bucharest. Still, I am greatly please that now we have mature and warm relations, based on common values and interests.

We have a strong bilateral collaboration, on all fields, to support common Declarations on launching strategic partnerships for the European integration of Republic of Moldova.

Many bridges were built between Romania and Moldova, but we also wish for concrete bridges and railways that will tie Chisinau and Bucharest.

We launched ambitious projects in terms of energy, transport and environment, but we have only just begun.

The arrival of Transgaz in the energy sectors is crucial for energy security of Republic of Moldova and is one of the biggest economic investments made by a Romanian company.

It is obvious that we can do much more. Romania became the first market open to Moldovan products.

The number of investments from Romania is growing. There are many projects, the benefits of which our citizens will be able to feel.

I myself am among one of the beneficiaries. I am proud to be among the first to have studied in a lyceum and university from Cluj.

On another hand, citizens of Republic of Moldova have suffered much pain in those 27 years.

We lived through the Transnistria War and even today, we do not have control over our whole country, because we are divided and a foreign army has yet to withdraw.

There were times when thousands of citizens got sick of living on empty promises left to search for a better life abroad.

Therefore, I previously said and wish to repeat.

We cannot change or erase our history, but we can build together a future. We can establish bridges, businesses and destroy spiritual barriers.

Members of the Parliament,

I wish to urge you to visit us as often as possible, to get to know each other better. Today, when this event is celebrated, I believe it to be the perfect chance to remember the lines of Dumitru Matcovschi:

Thrusted through fire and sword,

you, Basarabia, are a flower of yearning

your are the tear of my people.