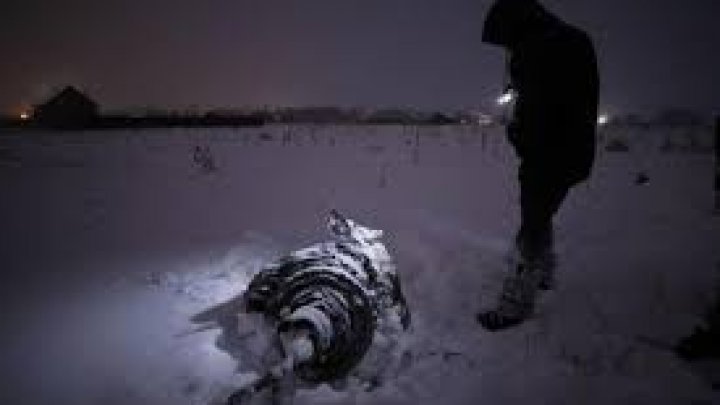 A Russian airliner has crashed after leaving Moscow's Domodedovo airport, killing all 65 passengers and six crew on board. The passengers included three children, ages 5, 13 and 17, state news agency RIA reported.

The Saratov Airlines was headed to the Russian city of Orsk, near the border with Kazakhstan. But it disappeared from radar shortly after takeoff from Moscow's Domodedovo Airport, and crashed near the village of Argunovo, about 80km (50 miles) south-east of Moscow, Russian state news agency Tass reported.
The plane went down in Ramenskoye District, in the Moscow region, the Russian emergency ministry told CNN.
"The snow is very dense ... the Moscow region has had some of its heaviest snowfall in decades," CNN's Matthew Chance reported from Moscow. "It's not clear at this stage whether weather was factor in this crash."
The cause of crash is unclear. Investigators and emergency crews are working at the snow-covered site.

Pieces of wreckage and bodies were found spread over a large area. One of the flight recorders has been recovered, officials say.

"The scatter of fragments of the aircraft and bodies of dead passengers occupies a large territory; the radius is not less than 1 kilometer (0.6 miles)," said Svetlana Petrenko, spokeswoman the Investigative Committee of Russia.

This is the first commercial passenger jet crash for more than a year - 2017 was the safest year on record for air travel.

Eyewitnesses told Russian media that the jet was on fire as it plummeted.

Investigators said the causes they were considering included weather conditions, human error and technical failure - but they did not mention the possibility of terrorism.

A child and two teenagers were among the passengers, all but three of whom were from the Orenburg region where Orsk is located, city mayor Andrei Odintsov told Tass news agency.

Two passengers were from Moscow and a third from St Petersburg, he added.

At Orsk airport, a girl whose brother was on the plane was shouting "Bring me back my brother!", Novaya Gazeta newspaper reported. A man sat sobbing over his mobile phone.

The plane was being flown by an experienced pilot with 5,000 hours of flight time, the airline told Ria-Novosti news agency

Saratov Airlines is based in Saratov, 840km south-east of Moscow.

In 2015 it was banned from operating international flights when surprise inspectors found someone other than the flight crew was in the cockpit.

The airline appealed against the ban and changed its policy before resuming international charter flights in 2016.

It flies mainly between Russian cities but also has destinations in Armenia and Georgia.