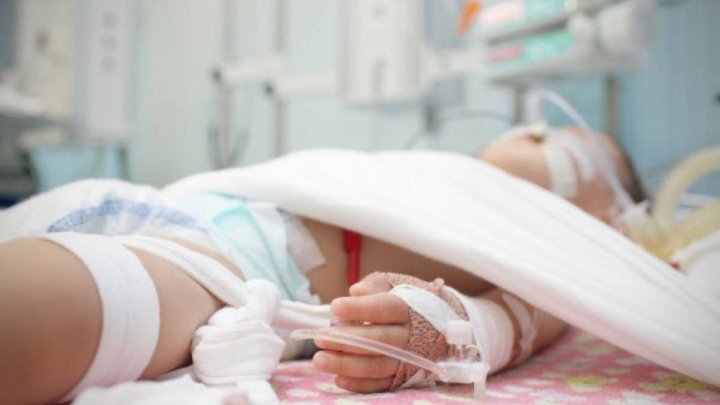 A 18-month-old girl was seriously hospitalized after being beaten up by the grandmother. The baby came with cranio-cerebral trauma, cerebral concussion and bruises on her face. The case occurred last night in Sângerei district.

According to police officers, the child and her brother remained under the care of their grandmother, while their parents went out shopping. Upon their return, the parents found their 2-year-old toddler crying and bruised. Her brother confessed that it was the grandmother who bet her, which the elderly did not deny.

"I'll open the gate and hear that the girl is roaring. The mother of my husband was staying next to her, putting the blanket on half of her body, feeding her milk. I was shocked to find out her situation. The girl was shaking, weeping, and she couldn't breathe. I asked Nichita who had made her become like that. He said his grandmother", said the mother, Tatiana Chiţan.

Investigation has shown that the 47-year-old woman and her son were drunk.

"I entered house and saw such situation, I called for help. But the mother-in-law stopped me and told me not to worry", continued Tatiana Chiţan, the mother of the girl child.

The girl was hospitalized at the Sangere hospital.

"The baby was in serious condition. It was suspicious that the baby fell off the bed", said Ana Curchi, doctor.

The doctors then alerted the police after seeing such horrible scene.

Although the grandmother initially denied having beaten the girl, she admitted it later, but said she had done it by chance.

The social assistant said the woman had relied on social support. Neither she nor her son are working.

"The family is socially vulnerable. She is unemployed, her son is recently released from detention, and he is also unemployed. She is abusing alcoholic beverages systematically, "said Marcela Criciman, social assistant.

The police filed a criminal case for domestic violence.

If found guilty, the woman risks up to three years in prison.