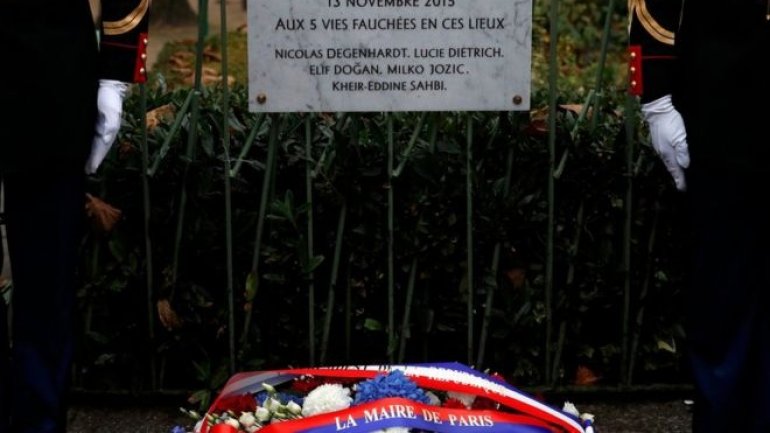 France's state of emergency imposed after last year's terror attacks in Paris is likely to be extended, Prime Minister Manuel Valls has told the BBC.

He said the measures were needed to "protect our democracy".

Mr Valls was speaking on the first anniversary of the attacks by Islamist militants, in which 130 people died.

President Francois Hollande is marking the first anniversary of the Paris attacks by unveiling plaques commemorating the victims.

Starting with the Stade de France and ending with the Bataclan concert hall, Mr Hollande and the Mayor of Paris will visit the six sites targeted in the attacks, paying tribute to the victims.

Mr Hollande is not expected to speak at the sites, saying he wanted the day to focus on remembering the victims rather than on politics.

Names of the victims have been read out at each site.

At the Stade de France, the son of victim Manuel Dias, the single person killed there, spoke on behalf of his Portuguese-born father, saying his father was "proof that integration is possible ''.

On Saturday - the eve of the anniversary of the massacre - the Bataclan reopened with a performance by British artist Sting.

The singer told the audience, including survivors of the attack, that they had to honor the dead and celebrate life.

A minute's silence was held at the renovated venue for those killed in the attacks on the French capital by jihadists from so-called Islamic State.

On 13 November 2015, a group of jihadists launched coordinated attacks on the Stade de France and restaurants filled with people on a Friday evening.

The Bataclan concert hall was the scene of the deadliest attack. Three gunmen entered the venue and fired on the crowd, killing 90 people.

On Saturday, in an interview with the BBC's Hardtalk programme, Mr Valls said the state of emergency would be extended because there was a risk of "attacks of the kind we saw in Nice".

France's state of emergency was extended for six months in July after a lorry driver ploughed through a crowd, killing 84 people in Nice on Bastille Day.

The measures give the police extra powers to carry out searches and to place people under house arrest.

However an official inquiry found that the state of emergency was only having a "limited impact" on improving security.

Mr Valls said the country must remain safe during the presidential and parliamentary election campaigns which are scheduled to take place in France between April and June next year.

Mr Hollande, who has yet to announce if he is standing, is the most unpopular president in French history. Polls show a leftist candidate has little chance of winning next year.

Pollsters also predict far-right leader Marine Le Pen will emerge as one of the top two candidates in the first of a two round election process.

Ms Le Pen had told BBC's Hardtalk last month that France's current government is weak, saying Mr Valls and Mr Hollande had failed to address the issue of immigration which in her view was directly tied to national security.

Although Ms Le Pen is thought to have little chance of winning the election, she has told the BBC in an interview being aired on Sunday that Donald Trump's victory in the US has boosted her own chances of winning.