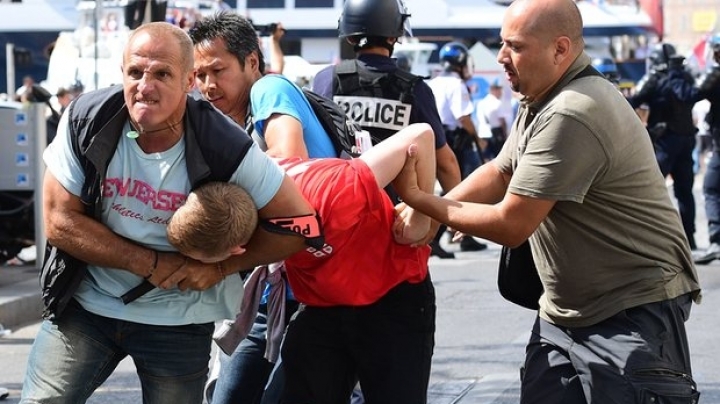 When French police stopped a bus carrying Russian soccer fans to Lille for Russia's next Euro 2016 match, Russian Supporters Union chief Aleksandr Shprygin thrust himself into the spotlight. Live-tweeting from the scene, he cast fellow fans on the union bus as innocent victims of ham-fisted police work.

After a standoff around the halted bus -- with Shprygin complaining that its passengers were denied water and toilet trips -- French officials said they had placed dozens of them in custody over suspected involvement in violence last week in Marseilles, where Russian fans were involved in clashes on the street and charged England fans inside a stadium after a 1-1 draw.

Shprygin said 29 supporters were being deported from France, while UEFA fined the Russian soccer federation 150,000 euros ($168,000) and warned that further misconduct by Russian supporters inside a stadium would result in the national team being disqualified from the June 10-July 10 tournament -- a major embarrassment, with Russia preparing to host the 2018 World Cup.

The Kremlin made efforts to avoid that outcome. President Vladimir Putin's spokesman, Dmitry Peskov, appealed to Russian fans in France to "follow the law" and "not to react to any provocations."

But such statements may have only diluted the belligerent message sent from Russia on June 13, when a deputy chairman of the lower house of parliament urged Russian hooligans to "keep it up" and a prominent law enforcement official asserted that French police spent too much time dealing with "gay parades" to know how to react to "normal" Russian men.

The fan disturbances -- and the public pride expressed by some in those two members of the governing elite -- seem to suggest there is only a small degree of separation between some parts of the Russian ruling apparatus, its official Supporters Union, far-right views, and soccer hooliganism.

The Football Against Racism in Europe (FARE) Network, which monitors racism in soccer for UEFA, points to Shprygin, who is a member of the executive committee of the national Russian Football Union and founded the official Russian Supporters Union in 2007.

A photograph widely circulated on social networks in recent days shows Shprygin raising his arm in a Nazi-style salute alongside a topless woman and a far-right thrash metal musician named Sergei "The Spider" Troitsky. Shprygin has dismissed the photograph as "drunken" and dating from 2001.

A veteran fan of the Dynamo Moscow team, Shprygin stirred controversy last year saying publicly that he would like players on the Russian national team to "have Slavic faces" only.