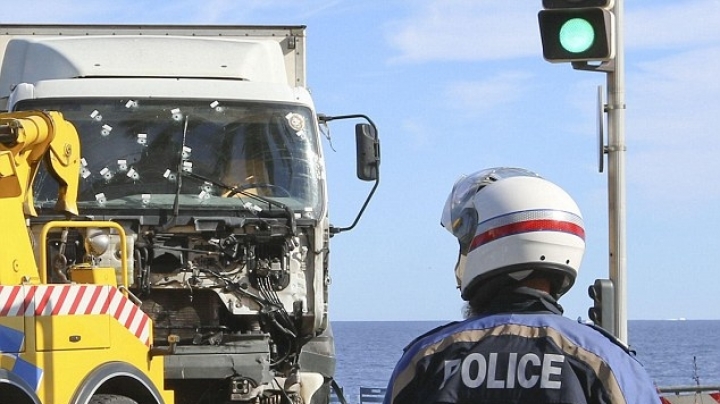 The French authorities were today accused of lying about the Bastille Day massacre as they covered up chronic security failings that allowed 84 people to die, reports Daily Mail.

As family of victims prepared to sue, there was particular anger that a 19-tonne lorry five times over the weight limit had been allowed to run people down on Nice seafront.

Mohamed Lahouaiej Bouhlel was unchallenged by police before he attacked the crowds watching a July 14 firework display in what should have been a pedestrianized zone.

Today it emerged that:

At one point the 31-year-old told officers he had ice creams in the back of his hired vehicle - despite the fact that he was clearly in an ordinary delivery truck with no fridge.

'It's unreal,' said Patrick Mortigliengo, president of National Federation of Road Transport hauliers in the Alpes-Maritimes region that covers Nice.

Highlighting weight limits that should have been strictly enforced, he said the lorry was a standard and easily recognisable Renault Midlum.

Mr Mortigliengo said any transport vehicle over 7.5 tonnes was banned from French roads on public holidays, while the limit on the Nice seafront was always 3.5 tonnes.

July 14 - when France celebrates the storming of the Bastille during the 1789 French Revolution - is the country's most celebrated public holiday, and every police officer in the city should have been aware of the ban.

As well as not mentioning any of the weight bans, the authorities have continually described the lorry as being a refrigerated one.

Mr Mortigliengo told France Bleu radio station: 'First, the sides of refrigerated trucks are in sealed plastic and the doors are much thicker.

'Second, refrigerated trucks are equipped with fridges by brand names like Thermo King, Carrier or another.

'Third, refrigerated trucks have an FR sign on the front that clearly marks them out. This was actually a Renault Midlum delivery truck.'

Paris prosecutor Francois Molins, who is leading the investigation into the slaughter, has claimed that Bohlel hired a '19 tonne refrigerated vehicle leased to a company' in nearby Saint-Laurent-du-Var.

Mr Molins has also confirmed that Bouhlel drove up and down the promenade hours before he started his attack just after 10.30pm.

Bohlel was shot dead by police after his rampage, and now investigators are trying to work out his motives.

Four men and a woman remain in custody in relation to the crimes.

Islamic State have claimed the Tunisian national as one of their 'soldiers' but Mr Molins said there was no evidence linking him directly to the terrorist group.

Bohlel has so far been portrayed as a violence-obsessed misfit with no interest in religion, who became obsessed with terrorism and continually looked up atrocities on the Internet.

A hate memorial made up of stones, rubbish and messages such as 'coward' and 'assassin' has been set up on the spot he was shot dead by police.

Locals have been seen urinating and spitting on it.