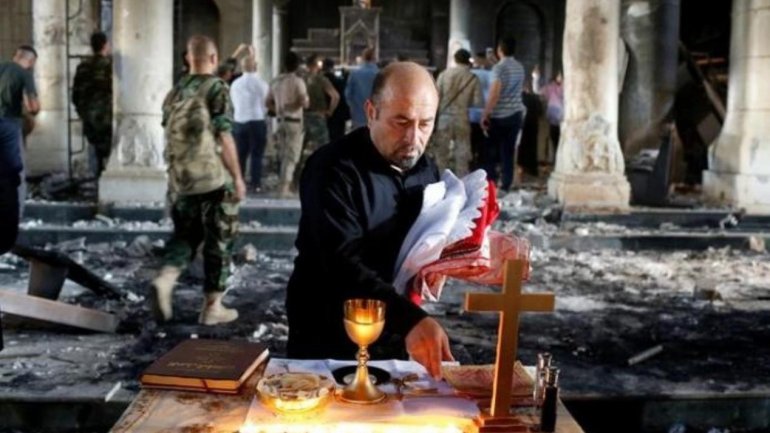 Dozens of Christians in northern Iraq have hesitantly returned to church for the first time in over two years after their town was freed from Isis.

Quraqosh, to the south of the Isis stronghold of Mosul, was recaptured from the jihadis last week as Iraqi coalition forces continue their two-week-old assault to drive Isis from the city.

Church bells rang out from the damaged bell tower for the first time in years as townspeople and troops erected makeshift wooden crosses on the roof of the Church of the Immaculate Conception.

Inside the church, the walls were blackened and charred from fires lit by Isis fighters as they retreated from the town last week, and statues lay on the floor in pieces.

But despite the chaos, dozens of civilans and members of the security forces approached the ruined altar to receive holy communion from the Syriac Catholic Archbishop of Mosul Butrus Moshe on Sunday.

“Our role today is to remove all the remnants of [Isis],” he said. “This includes erasing sedition, separation and conflicts, which victimised us,” the archbishop - who was born in the town - added.

Qaraqosh - Iraq’s largest Christian town and one of the oldest centres of the religion in the world - was captured during the group’s rapid blitz across the country from Syria in the summer of 2014.

Tens of thousands of people were forced to flee their homes for neighbouring Kurdish provinces after being given an ultimatum to convert to Islam, pay a tax levied on Christians, or face death.