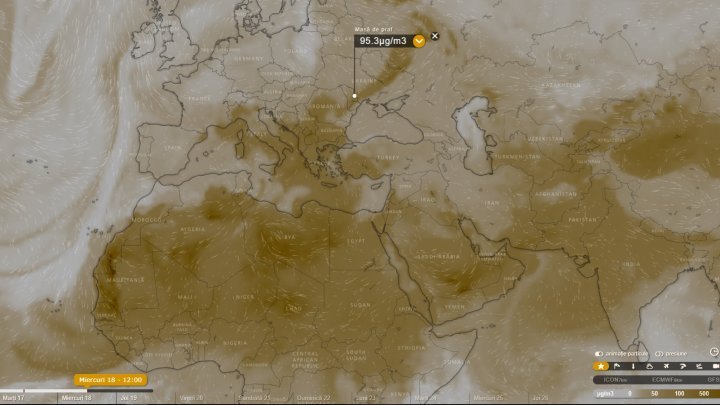 The Sahara dust cloud, which covered Italy and Hungary yesterday, could end up tonight in Moldova. According to meteorologists, huge amounts of dust will be transported across the central and eastern Mediterranean, the Balkan Mountains and the southern parts of Europe.

Saharan dust has also reached Romania. In Oradea, people's cars were covered with a fine dust film, while in Timis the rain left traces of reddish mud on the cars and the windows of the dwellings.

Unusual atmospheric conditions and winds transported by low pressure on the Mediterranean and North Africa blew up the stand storm in Rome and central-southern Italy, leaving skies cloudy and grey with a reddish hue on Sunday.

It follows a tornado ripping through northern Italy, striking fear into residents on Friday.

The phenomenon will be felt more strongly during Tuesday, when the dust reaches Moldova. Thus, the concentration of Saharan dust and sand will rise in the air, and will retreat on Wednesday with the entrance of a cold air front that will cleanse the atmosphere.

Exposure to the haze caused by Saharan dust tends to cause dry skin and cracked lips, but can lead to more serious problems for asthmatics.

Thus, if we believe the weather patterns of the University of Athens, then for Moldova, the amount of dust will be between 500 and 1000 milligrams per square meter. The highest dust intensity is forecast for today's evening, 21:00 local time.

Until now, the State Hydro-meteorological Service has not yet issued a weather warning.