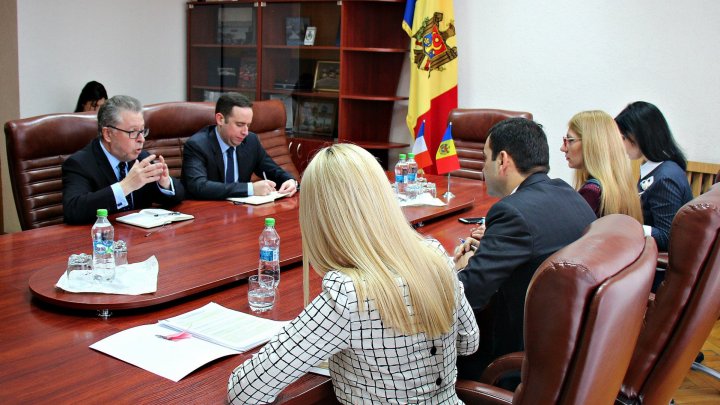 Minister of Economy and Infrastructure, Chiril Gaburici, has met today with Ambassador of France to the Republic of Moldova, Pascal Le Deunff.

The officials have appreciated the positive evolution of economic and investment cooperation and have mentioned the importance to strengthen commercial relations.

"We plead for consolidation of the bilateral legal framework. We are interested in launching negotiations in the economic collaboration Agreement, in creating a mixed intergovernmental Commission" Minister of Economy and Infrastructure said.

During the talks, Minister Chiril Gaburici spoke of Ministry's priorities, among which counts road infrastructure, development of the IT sector, energy security, attracting investments etc. "Implementing the European Union Association Agreement is one of the main priorities of Republic of Moldova's Government, while Ministry of Economy and Infrastructure is imputing all efforts for the transposition of the legislation in the transport area, to the European norms and standards" Chiril Gaburici explained.

In his turn, Ambassador of France to the Republic of Moldova declared that his country supports the initiated economic reforms and will offer the necessary support for their implementation.

During the talks, the officials have also spoken of the increased trade between Moldova and France. During January - November 2017, commerce increased by 20%, compared to a similar time in 2016, having registered income of 145,11 million US dollars.

France currently ranks 11th in the world among partner countries that have trade relations with Moldova. The French enterprises activating in Republic of Moldova, contributes to the local economic development, inclusively by creating new work places.

According to data presented by Chamber of commerce, our country has 230 French companies, investments in the social chapter reaching 130,38 million lei.