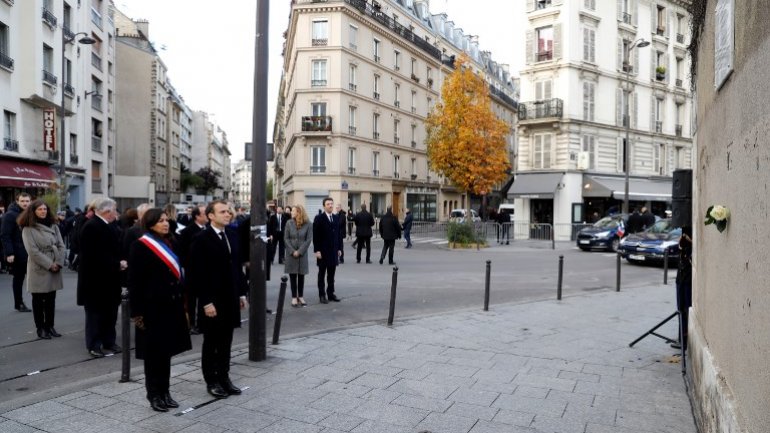 Two years to the day since the devastating terror attacks in Paris, French President Emmanuel Macron led a series of sober ceremonies around the French capital on Monday to commemorate the 130 victims.

Macron was joined by his predecessor François Hollande and Paris mayor Anne Hidalgo at the site of each attack on Monday morning.

"Two years on, Paris remembers," the city's mayor Anne Hidalgo tweeted, with the hashtag "Fluctuat Nec Mergitur" -- battered but not sunk, Paris' motto -- which became a defiant slogan after the attacks.

The ceremonies began at the Stade de France stadium in the suburb of Saint-Denis where one person was killed when three bombers detonated their suicide belts as France played Germany in a friendly match.

Macron laid a wreath before heading down to the 10th arrondissement to the site of the attack on the Carillon bar and its neighbouring restaurant Le Petit Cambodge.

The names of the 15 victims gunned down were read out in front of the survivors and the families of victims.

Macron, Hollande and Hidalgo then headed round the corner to the Café Bonne Biere where five people were killed.

Short ceremonies were also due to take place at the Belle Equipe, Comptoir Voltaire and the Bataclan concert venue where 90 were killed.

The event was purposefully low key and sober at the request of the victims' families. Macron did not make a speech.

The association Life For Paris, which was set up in the aftermath of the attacks as a support group for the victims will hold a private event later on Monday.

Macron was due to meet members of the victims' group as they released balloons into the skies over the capital to remember the dead.

Some family members of those killed have boycotted the event as they aggrieved at the lack of answers two years on.

The chief surviving suspect Salah Abdeslam remains in custody but is refusing to speak to investigators about his role.