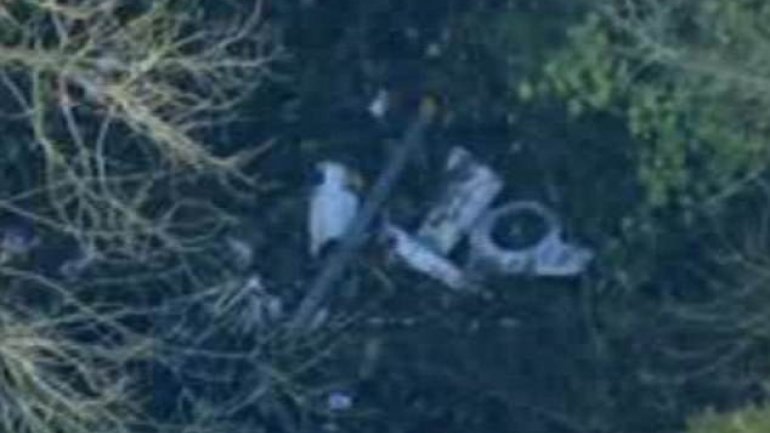 The first picture has emerged of the Vietnamese pilot who died in a mid-air crash while on a training exercise.

Nguyen Thanh Trung, 32, was in a helicopter with Captain Mike Green when they were involved in a collision with a Cessna 152 at 300 meters over Waddesdon Manor in Buckinghamshire.

The other light aircraft was on a training flight with student Saavan Mundae, 18, being instructed by Jaspal Barha, 45.

They said he was taking part in an advanced flight instructor training session in an Cabri -G2 helicopter.

Mr Mundae, who is a student at Bucks New University was studying air transport and commercial pilot training. He died alongside instructor Jaspal Barha.

A former colleague, Captain Phil Croucher, said: 'I shared a cup of tea with him only on Thursday morning. He was a true gentleman. He was probably the most well-respected instructor in the country. He achieved a very high position within the Army as an instructor.'

'He was an absolutely dedicated instructor. If you wanted a training instructor there's no one more highly qualified. Almost everybody in the country has been instructed by him. Most instructors have been trained by him.'

Mr Croucher said claims on a pilot forum by an air traffic controller who said he saw the aircraft disappear on radar suggested the two had collided accidentally.

He said the claims were that the helicopter had been flying a straight path and the aircraft was descending, and the pilot would have been unable to see due to 'blind spots' below and behind, although he added it was 'conjecture'.

Speaking to reporters at the scene, Ms Mears said: 'I can now confirm that those four people were all men. Two in each of the aircraft involved.

'All the families have now been informed and are being supported by officers in the family liaison arena. Three of the families have visited the site today with our support so they can understand a little bit more about what's happened to their loved ones.

'We remain on site today so that we work with the air accident branch and a number of other experts from the fire service and the military with a view to using their expert services to recover the men's bodies, hopefully before the end of the day.'

Mr Green was a senior instructor with Helicopter Services, based at the airfield.

A spokesman for the company, which offers training flights and gift experiences, declined to comment.

The plane involved was a Cessna 152 built in 1982 and owned by Airways Aero Associations which is based at the Wycombe Air Park.

AAIB investigators could be seen at the scene carrying what appeared to be wreckage debris in clear plastic bags.

Also at the site were fire investigators and police. Police tape marked the inner cordon which could be seen through the thick bushes that surround the area.

The aircraft collided just 15 minutes after taking off from Wycombe Air Park which trains rookie pilots.

Wreckage landed near the Rothschild family's Waddesdon Manor, 26 km north-west of the airfield, just after midday.

Unfortunately, neither of the aircraft will have been fitted with black box flight data recorders such as those normally found in large passenger jets.

It is understood the Air Accident Investigation Branch have called in specialist experts from the RAF to assist in moving the wreckage to their facility in Farnborough, Hampshire.

Residents in the nearby village of Upper Winchendon heard a loud bang and could see and smell a plume of black smoke from the crash scene.

Pictures from the scene show fragments of the helicopter's rotor-blades and the plane's fuselage scattered around the woodland floor.

Flight data shows a two-seater helicopter was flying at 300 m in the area at the time, but suddenly went off radar shortly after 12 noon. It had only been in the air for 15 minutes.

A Cessna 152 took off from Wycombe Air Park around the same time as the helicopter and disappeared from radar at the same time.

The plane thought to have been involved was made in 1982. The helicopter feared to have crashed was built earlier this year.

Both the aircraft feared to have crashed made successful loops this morning, suggesting that they were being used repeatedly for pilots' training.