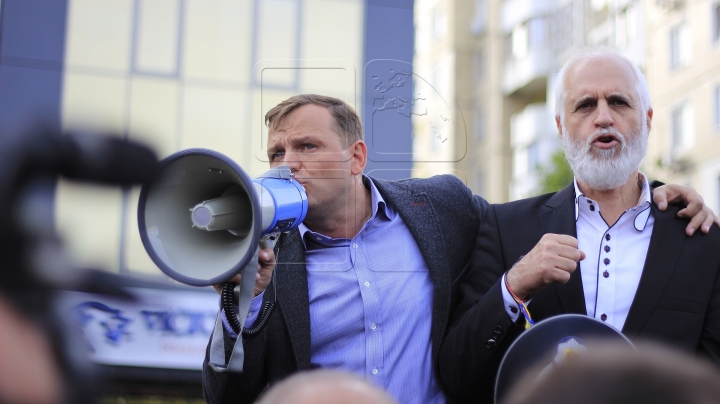 The godson of the mobster Victor Topa, Andrei Nastase, is richer than he considered himself. He declared officially that he owns ten houses, one of them in construction, an apartment, 11 fields and two luxury cars.

These are just a few of the goods declared to CEC by the leader of the Dignity and Truth Party, behind which are the mobsters Victor and Viorel Topa.

Thus, the house in Codru city, Chisinau municipality, is estimated officially to 2.2 million lei, even though the market value is much bigger.

The real estate with a surface of approximately 156 square meters is registered on his mother’s name, Ana Nastase. Even though previously the media wrote that the estate is finished, also confirmed by the neighbors, the godson of mobster Victor Topa declares that the building is still in construction.

In the declaration of goods, he mentioned other 5 houses, without mentioning where they are. The biggest one has an area of 159 square meters.

Nastase also owns an apartment in Botanica sector of Chisinau and other 5 houses in Mandresti village, Telenesti district. The leader of Dignity and Truth Party, behind which are the fugitives Victor and Viorel Topa, also included in the declaration of goods for 2014-2015 many agricultural fields which he owns in Durlesti city, Chisinau municipality, and in his home locality.

Previously the media wrote that leader of DA Party also has a house in Germany, in the city where his godfather, the oligarch Victor Topa, penally condemned in Moldova, lives. The real estate was not included in the declaration of goods, and Nastase did not answer his phone to explain why he did not declare all proprieties.

Also in real estate goods, Andrei Nastase mentioned that he owns a car of Mercedes Benz S 350 model and a Nissan Maxima, but he avoids to mention the value of the cars.

According to the declaration of goods, Nastase owns in bank accounts approximately 33,000 euro. The godson of the penally indicted Victor Topa also declared income of over 2,500 euro and 30,000 lei which he obtained through bank deposits, including in other countries. Nastase won over 160,000 euro from other sources, like compensations and bonuses. Other over 120,000 lei Nastase obtained through the alienation of a good.

Previously, the media wrote about the money Nastase transferred on the accounts of his mother and mother-in-law.

“I won this money here and abroad, brought them home. From a part of it I built a home, bought a field. Another part was put on the account of my mother and approximately the same amount was put on the account of my mother-in-law. You see that I cherish them both approximately the same” declared the leader of Dignity and Truth Party, Andrei Nastase.