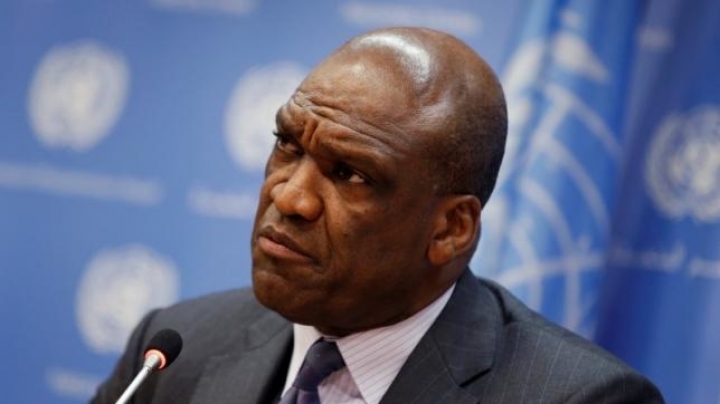 John Ashe, a former United Nations General Assembly president accused by U.S. prosecutors of taking $1.3 million in bribes from Chinese businessmen, has died at age 61, his lawyer said on Wednesday.

According to Reuters, the death of Ashe, a former U.N. ambassador from Antigua and Barbuda who served as General Assembly president from 2013 to 2014 and was arrested in October on federal charges, was confirmed by his lawyer, Jeremy Schneider.

Mogens Lykketoft, the current president of the 193-member General Assembly, said Ashe had died of a heart attack.

Ashe's death marked a surprising turn in the corruption investigation, in which seven people have been charged to date. He had been in plea talks as recently as last month as prosecutors considered further charges.

The status of those plea talks was not immediately clear. Schneider said his client had been preparing for trial.

A spokesman for Manhattan U.S. Attorney Preet Bharara, whose office was pursuing the case, had no immediate comment.

Those bribes were paid through intermediaries that included Francis Lorenzo, a suspended deputy U.N. ambassador from the Dominican Republic, and Jeff Yin, Ng's assistant, prosecutors said.

Lorenzo pleaded guilty in March. Ng and Yin have pleaded not guilty.

Prosecutors said Ashe also received more than $800,000 from Chinese businessmen to support their interests within the United Nations and Antigua.

Those bribes were arranged through Sheri Yan, who was the Global Sustainability Foundation's chief executive, and Heidi Hong Piao, the non-governmental organization's finance director, prosecutors said. Both women pleaded guilty in January.

Authorities said Ashe solicited bribes in various forms, including payments to cover a New Orleans family vacation and construction of a $30,000 basketball court at his house in Dobbs Ferry, New York.

At the time of his death, Ashe had only been charged with tax fraud in connection with the bribes, amid questions about whether diplomatic immunity might preclude any bribery charges.

But at a May 9 hearing, Assistant U.S. Attorney Daniel Richenthal said prosecutors were planning to seek a new indictment in the case against Ashe.

Lykketoft said Ashe's death would come as sad news for his friends and colleagues.

"Despite the many as yet unproven accusations made against him, Mr Ashe was for many years a hard-working and popular member of the diplomatic corps in New York and at the United Nations," Lykketoft said.

Ashe is survived by his wife, Anilla Cherian, and two children.