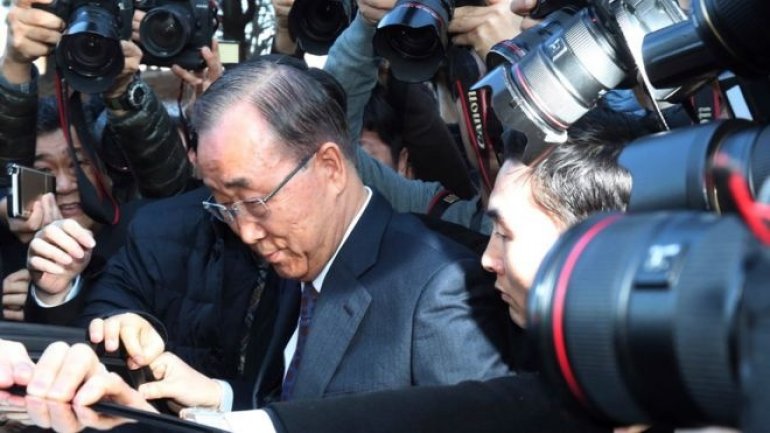 Former UN secretary general Ban Ki-moon has ruled himself out of the running for South Korean president.

In a surprise move, the leading conservative candidate blamed political slander and "various fake news" stories against him for his decision.

His withdrawal is a boost for liberal candidate and frontrunner Moon Jae-in.

South Korea is seeking to replace President Park Geun-hye, who was impeached in December after a long-running corruption scandal, informs BBC.

Mr Ban gave a brief press conference in which he said he wanted to use his 10 years' experience as UN chief to achieve national unity, but said he had been subjected to "malign slander akin to character assassination".

"With all kinds of fake news, my intention for political change was nowhere to be seen and all that was left was grave scars to my family and myself, and to the honour of the UN where I spent the past 10 years," he said.

He said he was "disappointed by old-fashioned, narrow-minded egoistic attitudes by some politicians, and I came to a conclusion that it would be meaningless to work together with them".

South Korea has been gripped by political chaos since Ms Park was unseated. Millions took to the streets to protest against her leadership.

She is now on a trial at the Constitutional Court, which will decide whether her impeachment is upheld or if she is returned to power.

If it is upheld, presidential elections will be held within two months rather than their proper date in December.

Mr Ban appeared to have significant support early in an unofficial campaign and was at one time the perceived frontrunner, but his approval ratings fell sharply as he faced criticism about his political competence.

He apologised in January after losing his temper at a press conference and calling reporters "jerks", and has denied allegations he took bribes from a businessman at the centre of a corruption scandal.

Ms Moon called Ban's decision "unexpected" and said she would be willing to seek his advice on international affairs.