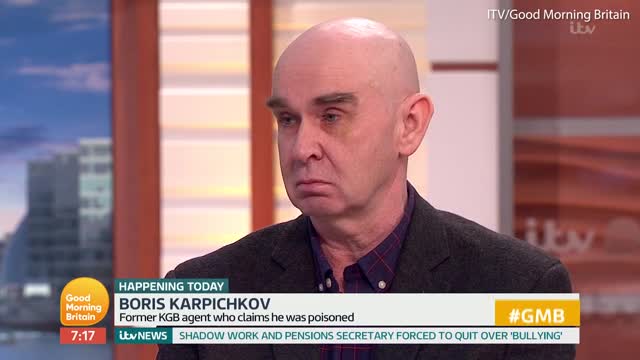 sursa: Former KGB agent was warned 'something bad would happen to him and Sergei Skripal' just weeks before the Russian spy and his daughter were attacked with nerve agent
Embed:
AFLĂ imediat Știrile Publika.MD. Intră pe Telegram

A former KGB agent claims he was warned by the Russian Secret Service that spy Sergei Skripal would be poisoned.

Boris Karpichkov, said he was on an eight-man hitlist which included Mr Skripal, 66, who was attacked with a nerve agent last week in Salisbury.

Mr Skripal and his daughter Yulia, 33, are in a critical condition in hospital following the incident, with Prime Minister Theresa May under increasing pressure to publicly point the blame at the Kremlin.

And ex-KGB major, Mr Karpichkov, who claims two have suffered two chemical attacks, said he was told about the plot in a threatening 'burning telephone' call.

Appearing on Good Morning Britain today, he said: 'First time, when I was communicated, (it) was (a) chilling message. I took it as a joke because I didn't believe (it).

'It was exactly on the date of my birthday which was 12th February, so it was about three weeks ago. (The) message (said) that something bad is going to happen with me and some other people, including Mr (Sergei) Skripal who I had no idea who this person is.

'Yes (there was a warning). From (a) very reliable source who is a senior operative field officer of certain Russian security service.'

Mr Karpichkov said he received the message 'by burning telephone' and added: 'No (I did not report it). I didn't regard it to be serious. Such warnings, threats, passed on to me, it's happened before, I'm still alive.

'I was shocked (by the poisoning of Skripal), not surprised. Not now.'

On whether the order came from Putin he said: 'I wouldn't be so specific, because I don't know whether or not it came directly from Mr Putin, but it came from a very, very senior level close to Mr Putin.'

Host Piers Morgan said: 'We've obviously been unable to independently verify what you're telling us, but your life as a double agent is well documented, you wrote a book about it, you've now made the extraordinary claim you received a call from Russian intelligence agencies warning you that your life and Sergei Skripal's life and others' lives were in danger three weeks before this hit, which raises all sorts of important questions.

'I imagine the authorities will want to speak to you as a matter of urgency.'

Mr Karpichkov lives in constant fear for his life.  He lives under a new identity with a British passport after fleeing to the UK following a fall-out with his Kremlin bosses.

He served in Russian intelligence for more than a decade, reaching the rank of KGB major and, as such, was privy to Kremlin secrets at the very highest level. He spent much of his career in the then Soviet republic of Latvia, where he specialised in counter-intelligence for the KGB.

When the Soviet empire collapsed in 1991, Mr Karpichkov stayed in newly independent Latvia, where he joined the country’s intelligence services. But he also remained on the books of the Kremlin, supplying information back to his old bosses.

However, he was jailed for two months on trumped-up weapons charges after a row over payments he claimed were owed to him by the KGB. Released and placed under house arrest in Latvia, he escaped via several countries to Britain, using one of several false passports he had been supplied with during his time as a spy.

Mr Karpichkov claims he suffered the first of two chemical attacks in November 2006 – the week defector Alexander Litvinenko was poisoned in London by polonium in a cup of tea.

Theresa May is expected to point the finger at the Kremlin for the poisoning of double-agent Mr Skripal and unveil a package of tough sanctions as early as today.

The Prime Minister is chairing a meeting of the National Security Council where she will be updated on the investigation into the attempted nerve agent assassination of the former Russian spy.

Counter-terrorism police and intelligence officers are understood to be preparing to present evidence that Moscow ordered the hit in Salisbury over a week ago.

This will include evidence that the nerve agent used to poison Mr Skripal and his daughter Yulia had to have been developed in a Russian laboratory, along with other high-value intelligence.