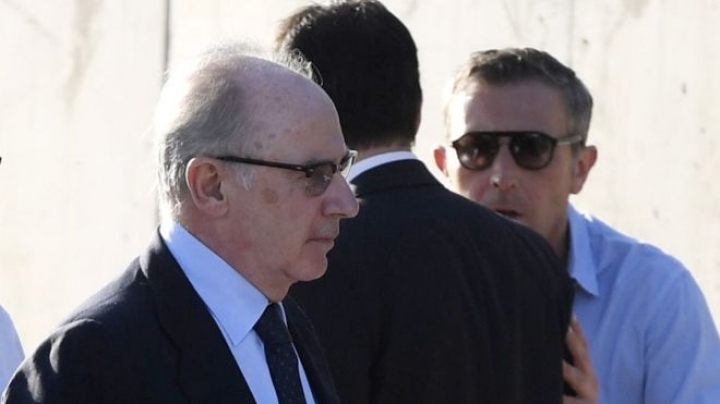 The defendants allegedly used "unofficial" company credit cards for luxury purchases, unconnected with their duties as board members.

The unofficial credit card purchases were not declared to the tax authorities. The system allegedly started at Caja Madrid bank and was continued by Mr Rato when Bankia was created in 2011.

A member of the governing centre-right Popular Party (PP), Mr Rato resigned as head of Bankia shortly before its near-collapse in 2012.

The government bailout of Bankia inflicted losses on 200,000 small investors, who held preferential shares in the bank.

Some of them voiced their anger outside the Madrid courthouse on Monday. "You wretches! Stealing money from pensioners!" they shouted at the accused as the trial got under way.

Prosecutors are seeking four-and-a-half years in jail for Mr Rato and six years for Miguel Blesa, the former president of Caja Madrid, a bank that was merged with six others in 2011 to create Bankia.

Mr Rato headed the International Monetary Fund from 2004-2007. He also served as Spanish economy minister, and his fall from grace helped fuel accusations that the Popular Party was riddled with corruption.

Prosecutors say the lavish credit card purchases took place from 2003-2012 - some of them during Spain's financial crisis, when millions of citizens suffered hardship and unemployment soared.