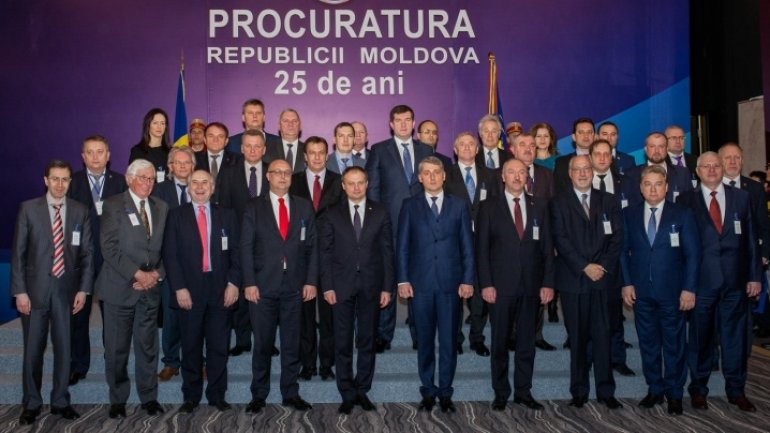 The reform of the prosecution has borne the first fruit. It has been felt by certain social categories considered untouchable until recently: top officials, customs officers, police and judges have been prosecuted and sentenced for corruption.

This idea has been shared by many participants in ceremony dedicated to the 25th anniversary of the Moldovan General Prosecutor’s Office.

General Prosecutor Eduard Harunjen has stated depoliticizing the institution must continue, as must fighting corruption: "The first result is that in 2016, the new institution handled more corruption cases than during its entire history. We got sentences in key suits touching on premiers, minister and other top officials."

Parliament speaker Andrian candu says the reformed prosecution has all the prerequisites to insure the citizens feel the law is one for all: "25 years later and after the reformed treated as a priority by the present rulers, we have finally got the right to ask for solid results and I am sure you, respectable prosecutors, have the ability to yield."

"After passing the bills insuring the reform of the judiciary, a qualitative leap has been made to strengthen the supremacy of law," said Justice Minister Vladimir Cebotari.

Head of the EU Delegation to Moldova Pirkka Tapiola has expressed support for further reforming the sector: "We are ready to back you in this difficult project by offering technical assistance because it’s to the benefit of all the Moldovans."

"The institution is strong because it’s made up of strong, open-minded professionals," said Romania’s general prosecutor Augustin Lazar.

As some prosecutors were decorated, a small group of the fugitive Balti mayor was protesting outside. Renato Usatîi is criminally probed for murder attempt and is wanted by the Interpol.

The prosecution reform is a priority of the ruling program and of the judiciary reform. The new prosecution law was passed in February 2016 and is valid since August. The General Prosecutor’s Office employs over 700 prosecutors.