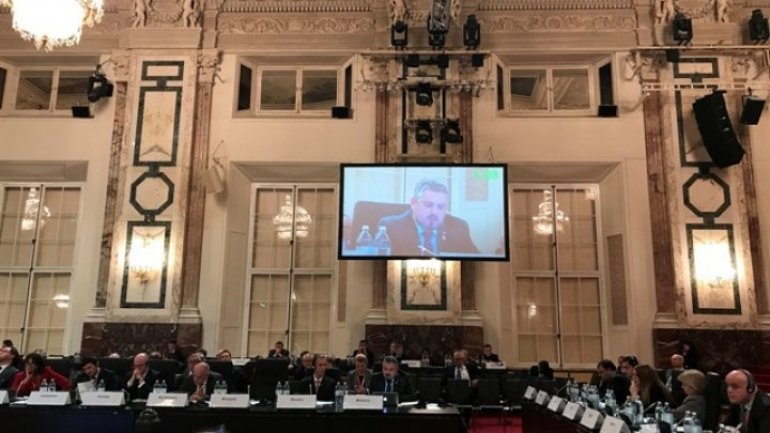 Deputy Prime Minister Andrei Galbur, Minister of Foreign Affairs and European Integration, today delivered a speech at the 24th meeting of the OSCE Ministerial Council, which takes place in Vienna on 7-8 December 2017.

In his speech, the Moldovan diplomatic addressed actual issues on the OSCE agenda, highlighting the importance of a comprehensive attitude to security, the need to revitalize armament control in Europe such as to honor the international commitments made by participating states, measures that underpin capabilities and the organization's efforts to prevent and manage crises in the region, implicitly the Ukrainian one, given its impact on the regional security environment.

Regarding the Transnistrian conflict, Minister Galbur reconfirmed the importance of the negotiation process in the "5 + 2" format and in the context of the Vienna meeting of 27-28 November 2017.

He thanked the OSCE president of Austria for contribution in this respect. The Moldovan official stressed the determination of the Chisinau authorities to continue their efforts to find a comprehensive and sustainable solution by granting a special status to the Transnistrian region, respecting the sovereignty and territorial integrity of the Republic of Moldova within its internationally recognized borders.

In particular, Minister Galbur said that "the Republic of Moldova remains deeply concerned by the continued illegal presence of foreign military troops on its territory. We firmly reiterate our demand for complete withdrawal of Russian military forces from Moldova in line with international commitments and provisions of the Constitution of the Republic of Moldova. "

It also reiterated the request to initiate meaningful discussions to transform the current peacekeeping operation into a civilian mission under international mandate.