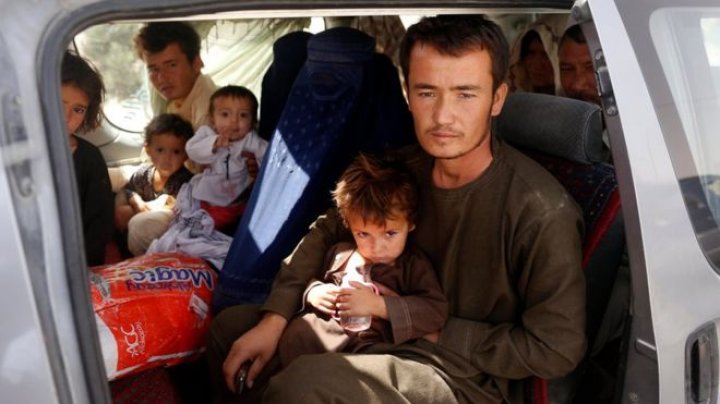 Food supplies in the Afghan city of Ghazni are running low, as a battle with the Taliban rages for a fourth day, the UN has warned.

"Life is getting hard for people, they can't get food or water," a man who fled the city on Sunday told the BBC.

More than 100 government soldiers and police have been killed since the Taliban stormed Ghazni from four sides early on Friday.

The city lies on the key highway between Kabul and Kandahar.

Control of it would effectively allow the Taliban to cut off southern Afghanistan from Kabul, the capital. The success of the militants' assault has come as a blow to the government of President Ashraf Ghani, which has now deployed an extra 1,000 troops.

The government and its Nato allies insist they are in control of Ghazni but reports suggest Taliban fighters continue to roam the streets and still control many government buildings. Phone communications are down, making it difficult to verify information coming out of the city.

In a news conference confirming the deaths of more than 100 members of the security forces, the government said it had killed up to 200 Taliban fighters.

Meanwhile, local media say a police officer has been killed by a bomb near the election commission's office in Kabul.

A protest was taking place at the time.

Those fleeing Ghazni say the situation for civilians is bleak, with at least 30 casualties among them, according to the government. More than 140 people have been wounded, hospital officials say, including security forces.

"Medication at the main hospital is reportedly becoming scarce and people are unable to safely bring casualties for treatment," the UN's humanitarian coordinator for Afghanistan said in a statement on Monday.

"According to sporadic reports from within the city, many families have reportedly taken shelter in their houses and are unable to leave their homes. Vital telecommunications networks and the electricity supply are down in the city of 270,000 people which has impacted on the water supply, and food is also reportedly running low."

An activist from Ghazni who organised a protest march in Kabul on Monday said there was a humanitarian crisis.

People are facing "serious hunger", Enayat Nasir told the BBC. He said the government had been warned a week ago it appeared a Taliban attack was imminent.

"We said if you can't control the situation, Ghazni will collapse in one week. And that happened," he said.

Some Afghan lawmakers have also accused the government of ignoring their warnings about the worsening security situation in the region.

Late on Sunday, Mr Ghani said he was sending urgent reinforcements to the city "to consolidate operational gains". The US-led Nato mission in Afghanistan carried out 10 air strikes on Monday and said "clearing operations" were ongoing.

It accused the Taliban of using civilians as cover and said the group had "achieved nothing".

Separately, it is reported that at least 100 Afghan army commandoes have gone missing in the east of Ghazni province, in Ajristan district. Officials have denied the reports.

The battle for Ghazni and attacks elsewhere in Afghanistan come as pressure continues on the Taliban to enter peace talks with the Afghan government.

Secret talks were recently held in Qatar between Taliban and US officials after an unprecedented three-day ceasefire during Eid celebrations in June that was largely respected by both sides.