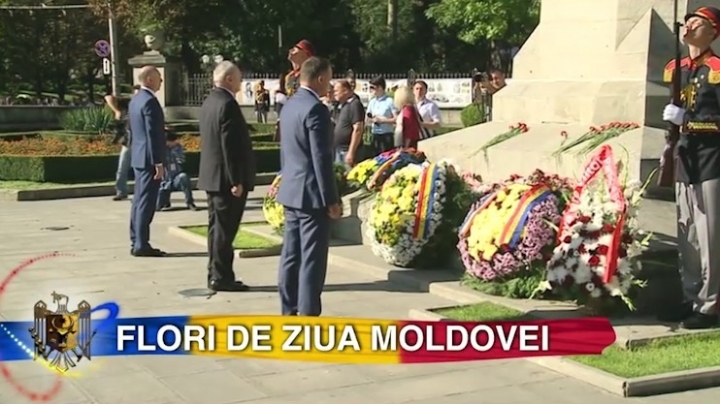 Independence Day started its celebration with the traditional flowers at the monument of Stephen the Great in Chisinau and at the monument “Grieving Mother” at the Memorial complex Eternity. At the ceremony participated the Moldovan authorities, deputies, ministers, cultural people, and ambassadors.

President of Moldova, Nicolae Timofti, Parliament speaker, Andrian Candu, and the prime minister Pavel Filip were the first who put flowers at the monument “Grieving Mother”. The officials were followed by ministries and deputies. Afterwards the dignitaries went to the National Assembly Square, at the monument of Stephen the Great.

At the ceremony participated the metropolitan of Moldova, Vladimir.  In the presence of the archbishop, the deputies of the Democratic Party also put flowers.

Vladimir Voronin was also present at the event, who came to the monument of Stephen the Great together with the colleagues from the Communist Party.

Flowers were also put by the chief of the European Union Delegation in Moldova, Pirkka Tapiola, and the ambassador of the United States, James Pettit.