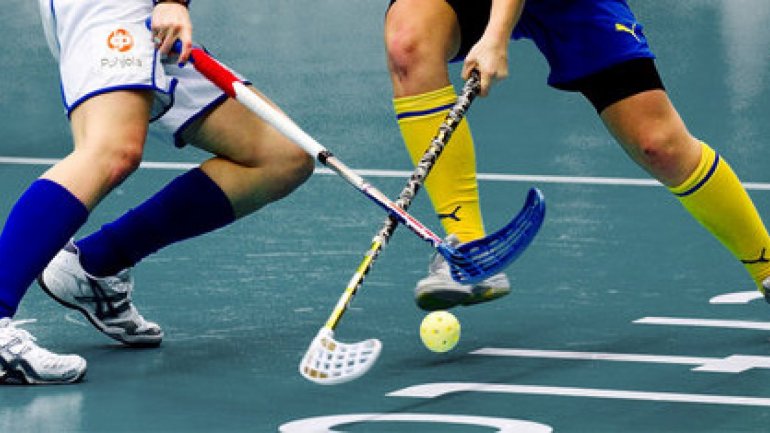 Floorball is practiced in Moldova for the past 2 years, but few know of its origins. Currently there are two officials clubs, in Chisinau and in Ungheni.

"This sport was born in in Moldova due to a person's and my wish, who created the club in Chisinau. How did we find out about it? We went to a sport conference in Kiev and saw how it is played. It was very interesting and a dream was born: to purchase the necessary equipment and train with my boys" coach  Vadim Beleavschi declared.

Floorball appeared and developed in the Scandinavian countries, it is solely played in a gym, on a 40 x 20 meters field. The team is formed from 5 players and 1 goal keeper. A game has 3 matches of 20 minutes.

Each player has an ice hockey stick. They are smaller in length and lighter, being made of carbon and with a plastic blade. The ball used weighs 23 grams and has 26 holes.

"The sticks are similar to those used in ice hockey. Here: this is the hook, and this is the handle. Those using their right hand hold it above, and those using their left hand - the other way around. We play with such a ball, we can say it is a replacement of the ice hockey puck" coach Alexandr Atamaniuc explained.

A stick costs between 4 and 100 euro, while the ball less than 2 euro. The most expensive equipment is the one used by the goal keeper, reaching to 400 euro. Moreover, the goal keeper has a more difficult job: he must be kneeling the whole match.

Floorball is winning the adoration of young people. More and more are becoming interested in this sport.

"I love this sport, because it is similar with hockey. I loved it since I was small. Used to play it in my home village all the time. As any sportsmen, I wish to develop it. I even became a coach. I wish to train professional players. To go to Sweden, where it is most developed and have a club with a manged field" coach and player Ion Dovcenco said.

Teams from Moldova often participate in various international tournaments. Next week will be help the second national Championship in Chisinau.