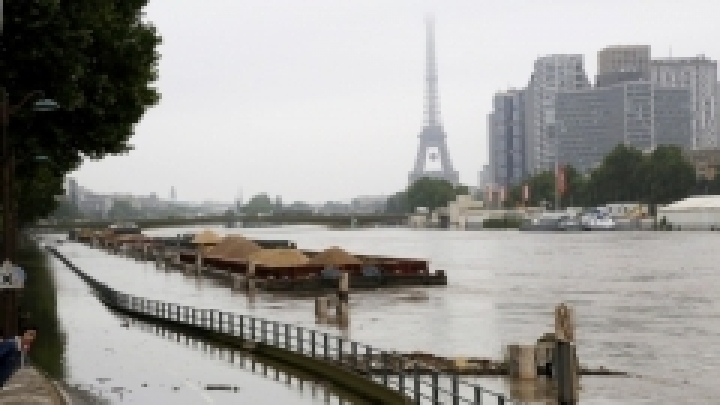 France is facing unusual levels of disruption from labor strikes and disastrous flooding with only a week to go before the start of Europe's biggest sporting event, the Euro 2016 soccer championship, says chicagotribune.com.

Overflowing rivers forced the evacuation of thousands south of Paris, while the Seine River traversing the capital rose to its highest in more than 34 years, shutting down the Louvre museum and some suburban train traffic. Meanwhile, strikes to protest a proposed labor law are disrupting railway traffic elsewhere, have caused gasoline shortages and reduced electricity output.

With images of inundated towns and flooded homes flashing across television screens, the swelling waters have been a distraction for a government dealing with a maximum-level terror threat and crippling labor protests ahead of Euro 2016. The month-long soccer competition starts June 10 and is expected to draw 2.5 million fans to France.

About 20,000 homes across the country were without electricity Friday morning because of the floods, I-Tele reported, citing power distribution group Enedis. Near the port city of Saint-Nazaire in western France, 125,000 homes were temporarily without power on Thursday after protesting workers disconnected power lines.

In the Paris region, the RER C suburban line was shut down because of flood risk and strikes, according to railway operator SNCF.

While water levels are starting to fall upstream of the capital, retreat of the flood waters will be slow, and victims may be discovered, Environment and Energy Minister Segolene Royal said on broadcaster France 2. In neighboring Germany, incessant rains have left at least eight dead.

The Seine River may rise as high as 6.2 meters above its benchmark in Paris Friday afternoon, according to authorities. That would surpass its 1982 peak of 6.16 meters and bring it to its highest level since 1959. It would still more than 2 meters below the 1910 level that flooded large parts of the capital. More rain is forecast in central France through Tuesday, according to Meteo-France.

The Louvre and the Orsay museums, on opposite banks of the Seine River, closed on Friday in relation to flood risk. At the Louvre, the world's most-visited museum with 9.3 million entries in 2014, employees will be moving artwork from flood-prone areas to higher floors.

The rains and the flooding disrupted travel in sections of the country this week, with train traffic hit between the cities of Metz and Luxembourg, in the east, as well as between Paris and Meudon, south of the capital, a spokeswoman for the national railway SNCF said on Thursday. The A10 highway southwest of Paris, and over 20 roads north of the city of Orleans were affected, while minor disruptions occurred on highways A71 and A85, operator Vinci said in a statement.

The flooding has been a headache for French authorities dealing with ongoing political and labor protest, as well as a continuing state of maximum alert following last year's terrorist attacks. About 90,000 security personal will be deployed to secure Euro 2016, according to the Interior Ministry.

Labor unrest may mean more travel disruption to come, with pilots at flag carrier Air France planning to strike June 11 through to 14 in a dispute with management. Air France Chief Executive Officer Frederic Gagey said soccer fans seeking to attend the Euro 2016 games can "take trains, drive cars" or fly other airlines to get to France.

Anyone driving to France might consider filling up before the border. Four of oil company Total's five refineries in France have been halted by labor unrest. While a run on fuel in the resulted in hundreds of gas stations running out of supplies, by late Thursday Total was reporting that only 47 of its 2,200 stations were without fuel. Total's Donges refinery may restart soon after 94 percent of workers there voted to end a strike, Total spokesman Paul Naveau said Friday in a phone interview.