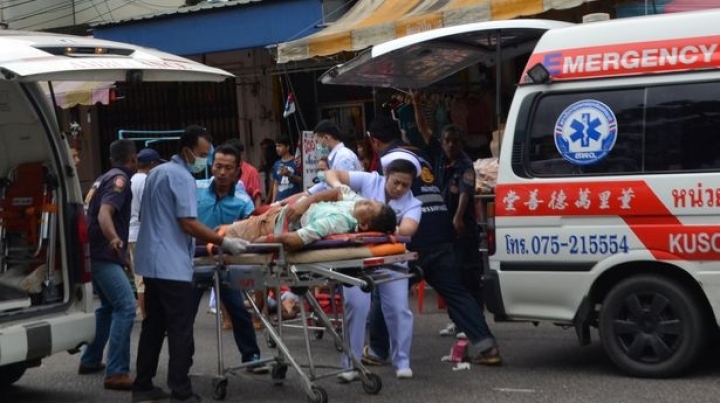 Five provinces in Thailand have been hit by eleven bombings in less than a day, authorities say. At least four people have been killed and about 34 injured. No one has claimed responsibility for the blasts - and it's not clear if the bombings are connected. Thai police say there's no evidence the attacks are related to international terrorism.

The series of blasts come days before the one year anniversary of the Erawan Shrine bombing, which killed 20 people, and five days after the country voted on a new constitution, reports CNN.

A woman working at a food vending cart was killed, Police Lieutenant Colonel Samoer Yoosumran said. Royal Thai Police said another 21 people were wounded. They include citizens from Italy, Germany, the Netherlands and Austria, according to Thomas Mohr with the San Paulo Hospital in Hua Hin.

Police Lieutenant Colonel Samoer Yoosumran said the bombs had been planted in tree pots near the targets.

Bombs in #Huahin were in plant pots, not in motorbikes. pic.twitter.com/cJcfSLDoVw

On Friday morning at least eight explosions occurred in five provinces. Bombs went off again Hua Hin as well as in Surat Thani, Trang Province, Phang-nga province and the resort island of Phuket.

Chanmornoi said four people were injured in the incident, though Royal Thai Police put the number of wounded at three. Two bombs also went off in the Bang Miang market in Phang-nga province at 9 a.m., Royal Police said. No one was injured.

Back in Hua Hin, another two bombs placed in tree pots went off at 9 a.m. and 9:05 a.m. near a clock tower, a city landmark, according to Royal Police.

Many of the Friday blasts occurred near seaside resorts -- but in the morning, before crowds would have gathered to soak up the sun.

However, the bombs were not particularly big and most beach resorts were on high alert after a bomb was found in Phuket Wednesday night, Paul Quaglia, a Thailand security expert and 20-year veteran of the CIA, told CNN.

Quaglia also said the bombings are likely not related to the recent constitutional referendum, as it would be difficult to plan and execute coordinated explosions in such a short time.