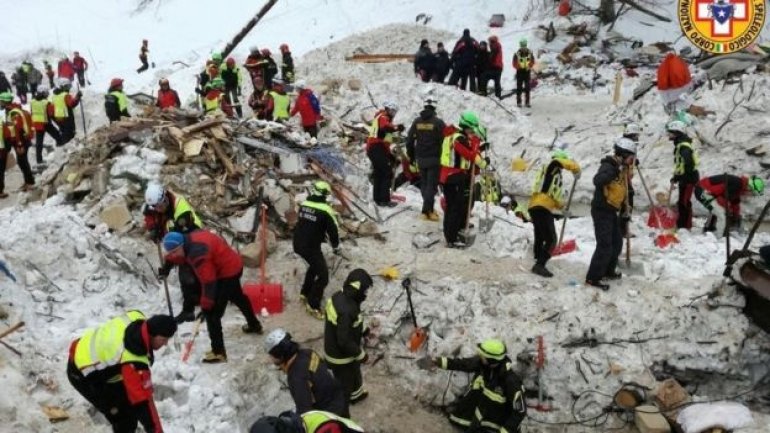 Six more bodies have been found in the ruins of the mountain hotel in Italy engulfed by an avalanche six days ago.

In the past few hours, the bodies of four men and two women have been recovered, reports say, bringing the total number of victims to 15.

But 14 people remain unaccounted for and rescuers say there is still a faint hope that some could still be alive.

Firefighters are trying to punch a hole through an 80 cm concrete wall into the hotel bar.

"We are working on the theory that the avalanche did not necessarily hit or destroy every room and that we haven't yet reached the heart of the structure," said spokesman Luca Cari.

He said rescuers were working around the clock and still hoped to find survivors. So far, 11 people have been found alive, informs BBC.

The first funerals were being held on Tuesday. Chief waiter Alessandro Giancaterino was among the first laid to rest in the next village of Farindola, while fellow waiter Gabriele D'Angelo was being buried a few kilometres away.

Rescuers had been able to excavate a path into the hotel which allows access for heavy machinery, Mr Cari said.

They will now try to create a shaft through the 80cm concrete wall dividing the bar from the kitchen, in the hope that there could be an air pocket - and possible survivors - in the space behind.

As the search continued, a rescue team was sent from the base co-ordinating the avalanche operation to help in an unrelated helicopter crash near by, state broadcaster Rai reported.