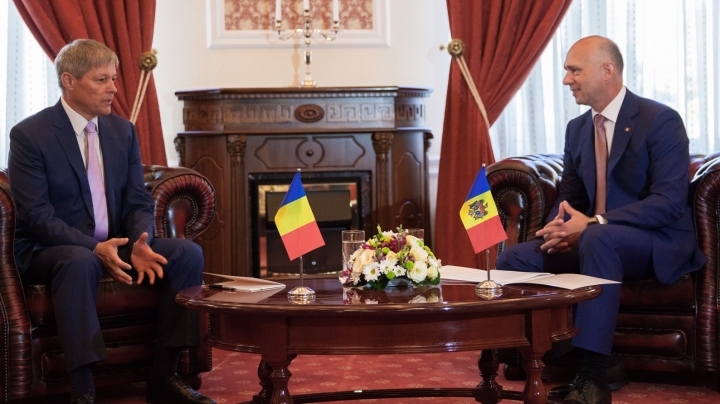 Romania welcomes the progresses fulfilled by Moldova in the last period of time and encourages the authorities to continue the reforms in the way they did until now. The declaration was done by the Romanian prime minister in Chisinau.

In his turn, the prime minister Pavel Filip has saluted the support of Romania and asked for a better cooperation in various fields, including in energetic and economic projects.

The Romanian official was welcomed with military honors at the state residence.

In the joint press conference the two officials talked about the strategic projects which will be implemented in our country with the financial support of Romania.

“I want to make a direct invitation to Romanian businessmen to invest in Moldova. We advanced with many reforms so that the business environment in Moldova would become more attractive. When we are talking about privatization or the energetic field, the businessmen from Romania are welcomed in Moldova.  We discussed with prime minister Ciolos about the exploitation of some ways of guaranteeing the investments done by Romanian investors in Moldova. From my point of view there is appearing a very good solution” declared Pavel Filip.

“It is important to stimulate Romanian investments in Moldova. There are the agreement, cooperation protocols between Trans Gaz and Moldovan partner, between Trans Electrica from Romania and Moldovan partner. These companies are ready to study the possibility to invest in Moldova, these interconnections on which we are working together to find easier not only sources of financing in order to legalize, but also to continue the construction of the gas pipeline Iasi –Ungheni. There is a bank from Romania who is ready to come to invest” mentioned Dacian Ciolos.

Also, the Romanian prime minister has encouraged the Moldovan Government to continue the started reforms.

In his turn, the Moldovan prime minister declared that, together with the governing team, are taking the necessary measures to win again the faith of citizens and of external partners.

“We guided ourselves by the reforms we had to draft and implement them in such a way external partners will believe in Moldova. You should not underestimate the capabilities of Romanian Government of those of the IMF when they are granting loans to Moldova. I can disappoint some people or other in our society because Moldova today is different from how it was at the beginning of 2016” said prime minister Filip.

His counterpart from Bucharest said that Romania will keep track so that the money given to Moldova will be valorized the right way and he is convinced that this process will be transparent.