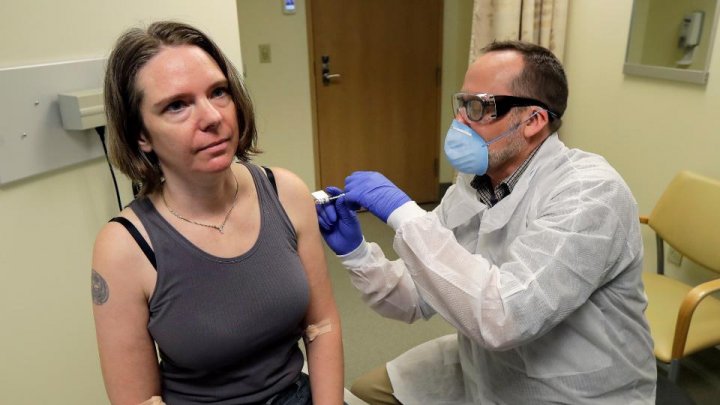 A new phase 1 clinical trial of a potential vaccine for the SARS-CoV2 coronavirus began on Monday in Seattle, with the first person to enroll in the trial receiving the vaccine.

The vaccine, mRNA-1273, was developed by biotechnology company Moderna in combination with researchers from the National Institutes of Health (NIH). The trial is being conducted at Kaiser Permanente Washington Health Research Institute in Seattle, writes Forbes magazine.

The phase 1 study aims to test three different doses of the mRNA-1273 vaccine ad hopes to recruit 45 healthy adults for the initial trial. Participants will receive two shots of the vaccine, 28 days apart and will be monitored to evaluate both the safety and immunogenicity of the vaccine. The latter involves seeing how well the vaccine stimulates an immune response to a protein on the SARS-CoV2 coronavirus surface.

The first person to get the vaccine was 43-year old Jennifer Haller from Seattle who said; “I hope that we get to a working vaccine quickly and that we can save lives and people can go back to life as soon as possible,” in an interview with TIME.

“This study is the first step in the clinical development of an mRNA vaccine against SARS-CoV-2, and we expect it to provide important information about safety and immunogenicity,” said Tal Zaks, M.D., Ph.D., Chief Medical Officer at Moderna in a press release. He added that Moderna is already working with the FDA and other organizations to prepare for a phase 2 trial, which would involve larger numbers of patients.

The start of the trial comes just 65 days after Chinese authorities sequenced the SARS-CoV2 coronavirus. Just 2 days after that, researchers at the Vaccine Research Center at the NIH finalized the design of the vaccine and began to manufacture it, finishing the first batch on February 7th. On February 24th after analytical testing, the company shipped it to the NIH.

“Finding a safe and effective vaccine to prevent infection with SARS-CoV-2 is an urgent public health priority,” said Anthony S. Fauci, M.D., head of the National Institute of Allergy and Infectious Diseases, at the NIH. “This Phase 1 study, launched in record speed, is an important first step toward achieving that goal,” he added.

The vaccine cannot cause COVID-19 and does not contain the virus as is the case with some other vaccines. Instead it contains a small piece of genetic code called mRNA which scientists have extracted from the virus and then expanded in the laboratory. In this case, the mRNA encodes the viral “spike” protein which is vital for the coronavirus to gain access to human cells. The researchers hope that the vaccine will stimulate the immune system to attack the virus, preventing the development of COVID-19.

The mRNA-1723 vaccine was not tested in mice before beginning human clinical trials, an incredibly rare occurrence which has proved controversial. Some experts are insisting that the severity and urgent need of the current situation means this is justified, whereas others are concerned that this could break various ethical and safety standards and put trial participants at greater risk than normal.

Although the design and production of the prospective vaccine was incredibly fast, evaluation of it will take considerable time. All of the participants will be followed for 12 months after the second vaccination to collect the data researchers initially need to figure out whether it is safe and effective.

The study is still enrolling healthy people aged 18-55 in the Seattle area to help test the new vaccine.