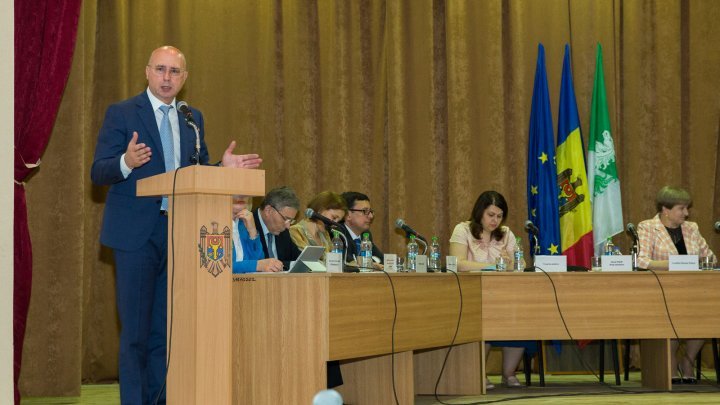 Problems and solutions of locals in Fălești district were discussed at a joint meeting of the central public administration (CPA) with representatives of the local public administration (LPA) in the region. Prime Minister Pavel Filip mentioned that the new format of meetings, which requires the consolidated intervention of the governmental team in each district of the country, will intensify the cooperation between the CPA and the LPA, thus enhancing the responsiveness of the authorities to the needs of the citizens.

"I know there is still a tendency to stand on different parts of the barricade, but I want to change this because we are jointly responsible to the citizens and have an obligation to provide them with a better living standard. I'm sure that this communication will make us more united and achieve our goals together, "said Pavel Filip.

The prime minister said that if the Executive's efforts were to focus on stabilizing the economic situation in the country and unblocking external financing, the authorities are currently focusing on promoting reforms and modernization projects of the country.

In this respect, the prime minister highlighted the central public administration reform, launched to increase the efficiency of state institutions and the reforms initiated to improve the business environment that generated economic growth, giving the state the possibility to make social investments.

"More money has come to the budget because people have started to work better and pay taxes. It is true that the reforms do not bring you a picture and are often criticized, but it has turned out that they are working in time," the Prime Minister stressed.

During the meeting, the Good Roads for Moldova project, launched this year by the Government, was also discussed. Within this program, Fălești district will benefit from repairing over 35 km of national and local roads, the total value of the works over 41 million lei.

In addition to improving the infrastructure, concrete steps are taken to motivate young people to remain in the country through the implementation of the First House Program.

The LPA representatives appreciated the Government's support in certain situations, and they said the issues that require the involvement of the central authorities. Among these were low wages in the budgetary sector, reconstruction of the aqueduct in the district, development of agriculture, local taxes, insufficient funding of educational institutions, social assistance and the need to purchase modern equipment for medical institutions.

Some mayors have called for the Good Roads Program for Moldova to be extended for the coming years.

Regarding the issue of the Fălești aqueduct, the Premier said that this issue is in the attention of the Executive and that in discussions with the Ministry of Finance the possibility of allocating the necessary financial resources was examined.

Also today, the government team will go to the 76 localities in Fălești district to discuss directly with the citizens.

PUBLIKA.MD reminds that during the weekly briefing, PDM chairman Vlad Plahotniuc announced that the Government will be more actively involved in solving the acute problems in each district. In this respect, ministers will have one day per week devoted to travel to the territory.

Therefore, on Fridays, ministers will go to a district where they will hold a Government meeting, where they will address the problems of the district they are visiting, as well as the identification of their settlement methods.

On the territory, the representatives of the Executive will have meetings with local authorities, economic agents, teachers, doctors, but also with other categories of citizens, including from villages.