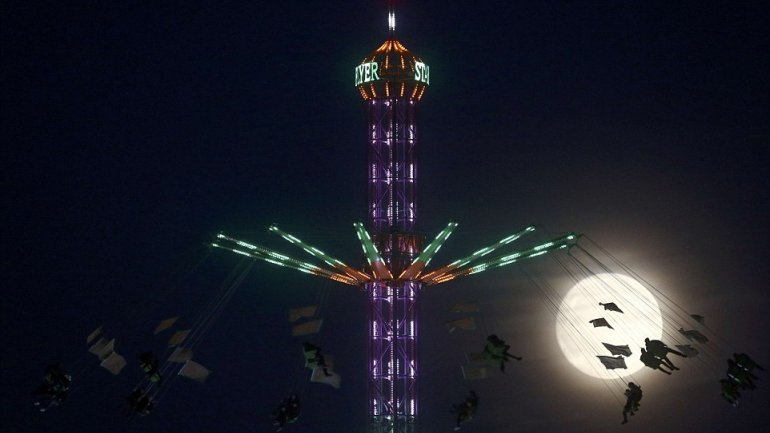 Spectacular photographs of the biggest supermoon for generations are already being captured - and the best is yet to come, reports Daily Mail.

The satellite is orbiting as close to Earth as it has done for almost 70 years tonight, but Monday is expected to be the best evening for capturing a rare close-up of the moon.

Although the countryside is the best place to see the night's sky in all its glory, there was still some stunning scenes over London landmarks such as Canary Wharf and the Eye.

And it was not just Brits who were getting in on the act, with the supermoon also snapped above America and a host of other countries.

A Met Office spokesman told MailOnline the best time to observe it would be on Monday night, but large areas of the UK may have their views spoiled by cloud.

While areas to the east of hills and mountains, such as the Pennines, eastern Scotland and eastern Wales, may benefit from breaks in cloud.

There will be a shorter gap until the next time you will be able to see it so close up though, with another supermoon expected in 2034.

The moon’s orbit is elliptical rather than perfectly circular, so as the moon moves around the Earth it is sometimes a little bit closer and sometimes a bit further away from us.

'If a full moon happens to occur when the Moon is also at its closest point then it will look slightly larger and brighter than usual – this is what is popularly known as a "supermoon",' Dr Marek Kukula, Public Astronomer at the Royal Observatory Greenwich told MailOnline.

'It’s a natural part of the moon’s cycle and happens around once a year. The differences in apparent size and brightness amount to few percent but they can enhance the already beautiful sight of the full moon, making a supermoon worth looking up for.'

For this reason, it appears to be bigger than normal - by about 10 per cent.

We usually get between four and six supermoons a year, but this one is special because the moon will be closer to Earth than at any time this century, and we won't get as near again until 2034.

During the event, it will appear up to 14 per cent bigger and 30 per cent brighter than an average full moon.

A winter supermoon is supersized, because the Earth is closest to the sun in December each year, which means its gravity pulls the moon closer to the planet making it appear brighter and larger than those that occur during the rest of the year.