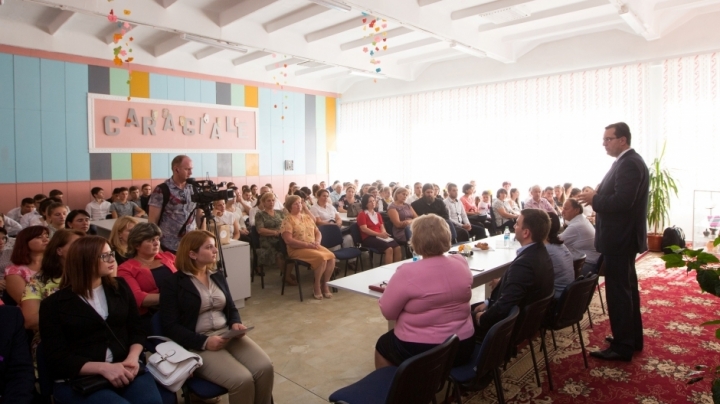 Democratic Party of Moldova has launched the campaign “Together we are stronger”, an action of promoting the benefits of the European integration. Thus, for three weeks, the Democratic Party leaders, deputies, ministers and members of the party will go to all localities of the country in order to talk with people regarding the opportunities offered by the European Union.

The first destination of the “European caravan” was Orhei district, where also went the pro-European candidate for the position of president, Marian Lupu.

The first stop of the “European caravan” was the high school “Ion Luca Caragiale” from Orhei. There, the nominee for the presidential Marian Lupu met the students and teachers.

“We are going throughout the entire country to plead for the European project of Moldova. If you want, DP is the strongest pro-European force, the main force of the governing” said the presidential nominee, Marian Lupu.

In their turn, the professors are claiming that the success of integration in the European Union also depends on the joint efforts of citizens.

Afterwards, Marian Lupu, together with his team, went to the packing Plant from Orhei, where he talked to the administration and the employees about the importance of the Association Agreement with the European Union.

“Not many people know the real advantages of the european integration for the Moldovan citizens. 70% of all it is produced here is commercialized in the EU countries, because it is a large outlet” said Marian Lupu.

At the end of the first day of campaign,the DP team also went to the Step-Soci locality.

“The Democratic Party has launched the most serious and strongest pro-European campaign in Moldova. We have many beautiful accomplishments, obtained with European assistance which we have to let people know about the benefits and advantages of the European integration process. There is no other way, better and more appropriate for the modernization and development of Moldova, than the one of European integration” said Marian Lupu.

For three weeks, “European Caravan” will go to all districts and localities of the country.